Delacre’s book is one of the first of its kind to have found its way into publication. It was published in 1989 by Scholastic, the largest publisher and distributor of Spanish-language books in the U. S.  Not many Latinos grow up without learning the popular children’s song, Arroz con Leche. But when Delacre went in search of a book that taught about it and other Latino folksongs for her own children, she was disappointed. Seeing the need, she began selectin the most popular songs from Latin for a book. She partnered with Elena Paz, who wrote the English lyrics, and Ana-María Rosado, who created the musical arrangements.  The end result is a valuable collection of traditional nursery rhymes and finger plays told throughout the Latin America. She credits the countries of Puerto Rico, Mexico and Argentina for the songs’ origins. 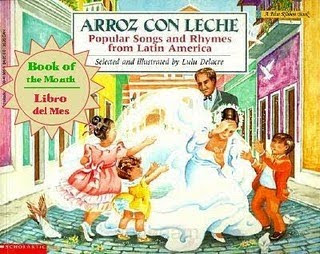