May 28, 2010
BEA took over the Jacob Javits Center this week, as publishers, editors, authors, agents, distributors, readers, etc, came from all over the world to talk about my favorite subject -- books!

I met lots of new authos so you know my reading stack has increased a hundred fold.  I want to brag about two authors I met and fell in love with. 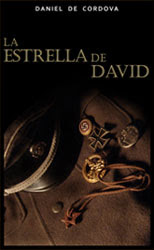 First up, DANIEL DE CORDOVA.  (Great mustache, cute glasses, sweet personality.)  He is the author of LA ESTRELLA DE DAVID, published by the Anura Group.  Daniel actually started his career as a cinematographer but he had a dream that changed his life and lead him from Caracas to Florida.

In Daniel's dream, in his comfy bed in Caracas, he dreamt that he was in a forest in Austria.  He doesn't know how he knew but he knew that it was Austria.  Suddenly out of the forest steps a silhouette -- imposing, tall, threatening.  Before he could take a step back, the silhouette steps into the light.  It's a soldier...a Nazi soldier and not just a soldier but an elite member of the SS and a perfect example of Hitler's new Arian race.  The soldier -- Ralf Holz -- asks Daniel to tell his story.  Daniel admits that he was shocked by the request but he couldn't say no when he noticed the tears rolling down Ralf's cheeks.  So he promised to tell the story.

He started to tell Ralf's story in film but without the funding the project got nowhere, but a promise is a promise, so Daniel decided to give Ralf's pain a voice.  LA ESTRELLA DE DAVID is a thin volume, in Spanish, about a Nazi officer and his redemption.  The writing is powerful and the images brutal.  A couple of times I winced and for half the book, my heart was pounding against my chest, but I couldn't put it down.  If it would have been a film, I would have closed my eyes.  An excellent read.  Daniel is working on getting his book translated into English.  I'm going to do my own translating for my friends who are into WWII but don't speak Spanish.

To learn more about Daniel de Cordova visit him at http://www.de-cordova.com/ and http://www.anuragroup.com/. 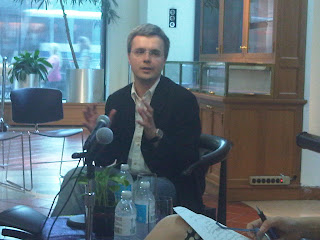 The other author I fell in love with is JUAN GOMEZ-JURADO.   Journalist turned author, Juan is a great speaker.  He's funny, outspoken and so sincere you can't help but like him.  If you have never heard of him, don't worry, you will!

He wrote an "international bestseller" -- GOD'S SPY -- that was translated into 40+ languages.  His second book, THE MOSES EXPEDITION, is coming out in August and it's already rumored to be another runaway bestseller.

Juan was inspired to write by his father.  His father would read him a story every night from a special blue book that sat on a shelf in the living room.  Juan loved the stories, especially the one about Little Red Riding Hood fighting off alien invaders.  When he was old enough to read, Juan sneaked into the living room and climbed upon the sofa to reach that stupendous blue book.  It turned out to me an instruction manual.  That's when he realized that his father was making up all those stories.  That was when Juan decided to be a storyteller as well.

Despite a teacher who told him to find a better dream -- out of respect, he didn't ask them if they were stupid! --, Juan persued his passion.  He became a journalist and honed his craft.  He wrote a non-fiction book about the Virginia massacre, but fiction was his goal.

Juan states that he is an American who was born in Spain.  His idol is Steven Spielberg and his favorite authors include Stephen King, John Grisham and Dan Follet, so is it any wonder that his first book is a thriller.  Juan claims that thrillers are the perfect metaphor for life -- everyone is racing against a ticking clock.

Juan is a liar, he admits it, but only in fiction.  He is honest to a fault, but hey, he's a writer and so he can lie and kill people to his heart's content.  And, he does, beautifully.  GOD'S SPY is about a serial killer in the Vatican.  No, he is not trying to be another Dan Brown.  GOD'S SPY is no DA VINCI CODE.  Juan's book is about death, religion, silence and forgiveness.  I've just started the book and I am on the edge of my chair.

I hope you will add these two gentlemen to your "authors-to-read" pile.  They are worth it and cute too.

Mayra Calvani said…
Thanks for bringing these authors to my attention! I'm going to invite them to be my guests on Latino Books Examiner.
9:23 AM