June 30, 2010
Today is the day!  In case you have not heard, the movie "Eclipse" debuts today.  It is the third installment of the TWILIGHT series.  And so with a nod to Edward Cullen, the new Prince of Darkness, I would like to play tribute to two vampyres -- two Latin Lovers!! -- who came before him and still reign.

They are none other than Frank Langella and Antonio Banderas. 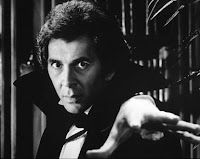 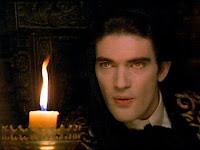 Frank Langella's Dracula on the big screen and on Broadway seduced millions of women around the world.  It's those eyes.  They say, be mine, and so you are.  Lucy, Mina and I could not say no.  Could you?
Antonio Banderas as Armand in Anne Rice's "Interview with a Vampire" was sexy as hell.  The man, the vampyre, is seduction personified.  Definitely a Latin Lover worth sticking your neck out for -- pun intended.
For a complete list of my favorite Hollywood vampyres, please check out my blog post on The Four Horsewomen of the Metropolis.
Who is your favorite vampyre?  Who can't you resist?  Do tell.