July 26, 2010
Writing should feel like it’s the most important thing in the world to you.
M.Padilla

THE GIRLS FROM THE REVOLUTIONARY CANTINA
by M.Padilla
Thomas Dunne Books
http://www.mikempadilla.com/ 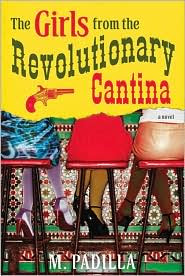 Q:  How did you get the idea for the book? Who did you base the story on?

When I was a kid growing up in the San Francisco Bay Area, I used to look forward to whenever my Spanish-speaking relatives from Los Angeles and Mexico would come to visit. I have particularly fond memories of the women. They were incredibly funny, and they brought a kind of life and energy to our household that was so different from what I was used to. Their voices really are a big part of THE GIRLS FROM THE REVOLUTIONARY CANTINA.

Another inspiration comes from a fascination I have about friendships and how they begin, evolve, and sometimes die. The challenges they can sometimes pose, especially as people change and come to want and need different things, are far more interesting to me than friendships that are perfect and everyone gets along, and where everything is wonderful, warm and fuzzy. It’s also a richer source of comedy. I don’t think CANTINA would be nearly as funny if there weren’t that kind of conflict.

I didn’t consciously set out to write a novel about females friends – the story just evolved that way. As I created Julia, our heroine, my plan was that the story would be mostly about her work and romance struggles. But as I wrote, her friends started taking over. They started doing funnier and funnier things, and after a while I couldn’t ignore that the story was becoming as much if not more about them and about Julia’s learning how to deal or not deal with their character flaws.

How men approach conflict in their friendships is quite different in my experience, and how Latino men deal with conflict might be even more different than that. I would love to explore that topic in a novel. I suspect that the humor, if I were to take a comic route, might be qualitatively different.


Q:  Who is your best friend? How long have you been friends? Has a woman ever come between you?

My best friend Chris and I have been friends since 2003. We’d met prior to that, but it wasn’t until our mutual best friend, Richard, passed away that year. As a result of his death, Chris and I got to know each other much more quickly than we might have otherwise. It was an intense bonding experience.

It also brought someone into my life that initially I might not have felt thought I’d have a deep connection with, just because we are so different. In many ways Chris is to me what Julia is to the character Nina in ‘Cantina.’ Julia and Nina are extremely unlikely friends – you wouldn’t put the two of them together at first glance. Yet over time they discover that they have much to offer each other.

No, no woman has ever come between us. Nor has any man. We have very different tastes, so we've never had that sort of conflict. We're both partnered now, so our friendship has deepened and evolved.


Q:  What is your writing routine?

I tend to write in bursts, so I will sometimes go several weeks without writing, and then dive into the writing for month or two. I tend to write new material better in the mornings and I tend to revise and edit better in the afternoons, so I’ll often divide up my writing days that way. And I can almost never write at home. I’m most productive if I’m in a public space, where I can look at things and watch people.


Q: What authors / what books have inspired your writing?

The range is very broad – but there are a couple who played a big role in CANTINA.  One is Jane Austen. One of the first literature classes I took in college was a novel class. A couple of Austen novels were on the syllabus. I was not looking forward to reading her. I don’t know why, but I thought her novels would be dry and not about anything that would interest me. I couldn’t have been more wrong. I don’t think have ever laughed so hard as when I read PRIDE AND PREJUDICE. I was truly dazzled by the intricacy of her storytelling, and the compassion that she showed for even her most unlikeable characters. There’s no question that her voice was in my head when I wrote my novel. Structurally there are similarities, too. I actually included a number of nods and winks to her throughout my book – the most obvious of which is the name of the company Julia works for.

Another influence is Edith Wharton. Her books, while very different, have two things that I wanted to bring to CANTINA.  The first is that her protagonists end up in really difficult situations through a combination of forces outside their control and through their own misguided decisions. I wanted that for my Julia character – to find herself getting deeper and deeper into problems. And like Wharton’s novels, I wanted this to be a page turner. Even though my novel shares nothing with Wharton in terms of tone, I still wanted the reader to come to the end of each chapter and have the urge to read just one more chapter to find out what happens next. Whether I’ve succeeded or not will be up to the reader.


Q:  Your next book is darker and about men. Is that sexist: women light, flirty; men dark, brooding?

What an interesting question! That distinction certainly wasn’t on my mind when I started either book. One thing I hope readers of CANTINA will recognize – if I’ve done my job well, they will – is that no matter how zany the scenarios are that I create for my characters, I do ultimately care about them and respect them. I think as long as you honor your characters in this way, with careful storytelling and attention to craft, it doesn’t matter whether the world you create for them is wacky or somber.

Having said that, I’d add that in my experience there is something to the old adage about comedy being harder than drama. Effective comedy has more moving parts, if you will. The various components all need to mesh just right for it to be funny without losing your investment in your protagonist. In this regard, if I were to star in someone else’s novel, I would hope that it would be a funny one. I think I would feel a bit more honored.

We’re trying to promote the book online as much as we can, and bloggers like you are playing an important role in getting the word out. I’ve also been trying to use social networking sites to generate interest.


My next signing will be at Border’s bookstore in Union City, CA on August 28. You can go to my website and click on “Events” for the complete schedule of upcoming appearances.  I’m also trying to do readings and I’m very open to talking to book groups in person and by phone.


Q:  What is the story behind your sale to Thomas Dunne?

The first step in getting CANTINA published was finding an agent. I found a great one, Joy Azmitia, with Russell & Volkening in New York. She asked me for some revisions of the book, and then she started shopping it around to publishers in 2008. After six months or so, she told me that St. Martin’s Press/Thomas Dunne was interested, and a few weeks after that the book sold. My editor at St. Martin’s is Toni Plummer, and she’s been great to work with, and very patient in seeing a first-time novelist through this process. 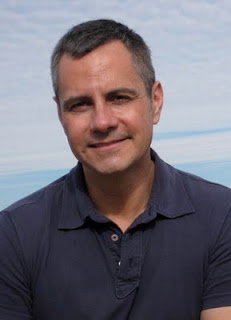 Q:  What advice would you give to new writers?

Find a workshop or writing group that is smart and tough. Once you find the people whose critical skills you respect – don’t let go of them!

Also, one of the best skills you can develop is learning to listen – to your inner voices that guide you in writing, but also to the voices of others who offer criticism. The more a piece of criticism irritates you and the more forcefully you reject it, the more likely it is that it contains at least some small kernel of truth worth paying attention to.

Pursue your writing with both passion and humility. Writing should feel like it’s the most important thing in the world to you, but it is also good to remember that there other, better ways of making an impact on the world if that is what you want to do.♥

noname said…
Outstanding interview! The questions were the foundation for the author's revealing and thoughtful answers which provided interesting information about both the author and the book. As soon as I finish this comment I will be ordering the book.
12:48 PM

Thelma T. Reyna said…
Wonderful interview, Maria. I try to keep up with new authors, and Mike Padilla is someone I'll add to my list. The pace and humanity of this interview is engaging and enlightening. Thanks for keeping us "in the know."
5:19 AM