BOOK REVIEW: THE MADONNAS OF ECHO PARK by Brando Skyhorse


“We slipped into this country like thieves, unto the land that once was ours.”
“People don’t understand miracles. They expect too much from them.
Sometimes, a miracle is best when it is you that sees, and God that knows.”
THE MADONNAS OF ECHO PARK
Brando Skyhorse
Free Press, 2010 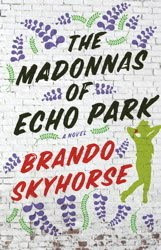 THE MADONNAS OF ECHO PARK is not so much about the immigrant experience, as it’s about finding and holding onto the American Dream. Skyhorse’s characters are already in America. The old country has been left in the past; now, their only focus is to make a place, a home for themselves in this new land, a land that was “once theirs.”

The story is told in vignettes – quick peeks into the lives of the people of Echo Park. A Madonna MTV video makes the L.A. neighborhood famous; a drive by shooting makes it infamous. The stories are interconnected and revolve around the Esperanza family, as they struggle to fit into the community and into society as a whole.

There’s Hector, an illegal all his life. He lost his wife, his child, his job of 18-years and then his freedom, when he witnesses a crime and tells the police, only to find that he’s the only one going to jail.

There’s Felicia, his ex, struggling to raise her daughter. She’s a cleaning lady, a silent, faceless worker until a drive by shooting pushes her into the spotlight.

There’s Aurora, straddling two worlds, two cultures, not knowing who she is or where she belongs.

And around them is the community of Echo Park, with its colorful characters: A religious hypocrite who sees the Virgin Mary at a bus stop; a bus driver who’s separated himself totally from his roots until one night the struggle for survival is fought on his bus; an ex-gang member who doesn’t understand his son’s desire to enter the army; and, a charismatic seamstress who settles for the familiar and loses her life on the job.

THE MADONNAS OF ECHO PARK is a worthy read. True, following the stories and the characters is confusing at times, but the characters are engaging and realistic. I heartily recommend it.♥


ABOUT THE AUTHOR:    Brando Skyhorse was born and raised in Echo Park, California. He’s a graduate of Stanford University and the MFA Writers’ Workshop program at the University of California, Irvine. His next book is a memoir about growing up with five stepfathers.

1) Who are the Madonnas? Have you seen the MTV video?

2) Are these immigrants truly living the American Dream?

3) Identify the family ties. Who is related to whom?

4) What is the significance of the visitation from the Virgin Mary? What does the “Lord” know? What role does religion play in this book?

5) What do you think is captured in the infamous photograph?

6) What is the importance of the jacaranda trees? What events do they witness?

7) Are there any happy endings in this book?