"The Sound of Music” is one of my favorite musicals. Julie Andrews will always be Maria – that young, innocent novata, novice, who leaves the convent to become a nanny and ends up married to the “master of the house.”

My favorite Samartin book is still BROKEN PARADISE, but VIGIL is another emotional success. VIGIL’s Ana is like Maria. She is a Carmelite novice, who is sent to work as a nanny for six months and ends up staying forever. But there the similarities end. VIGIL is not a romance. It’s more a story about the bonds of family and the healing power of love.

The story is written in a circular rather than a linear journey; moving from present to past and back again, adding depth and texture to the novel. Samartin grabs the readers from the first and doesn’t let go until the surprising but satisfying conclusion.


SUMMARY: While holding vigil at her lover’s deathbed, Ana remembers her past. As a child, she fled war-torn El Salvador and the atrocities of war and took shelter at a convent in the California. She is ready to take her vows of chastity, even though she has an insatiable curiosity about life outside the convent walls. Recognizing her interest for what it is, Mother Superior insists that Ana accept a position as a nanny to the wealthy, influential Trellis family. What begins as a six month assignment lasts a lifetime. Ana becomes indispensible to the Trellis’ and to the surprise of everyone, most of all herself, very much a member of the family.♥ 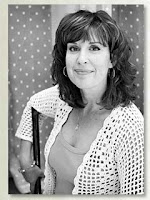 ABOUT THE AUTHOR: Cecilia Samartin won the prestigious Mariposa Award for her debut novel BROKEN PARADISE. VIGIL is her third novel. Visit her at http://www.ceciliasamartin.com/.

COMMENT: Please leave a comment and share with us your thoughts on VIGIL. What did you think of Ana? of the surprise ending? What is your favorite Samartin novel? ---mcf

Unknown said…
Great review, thanks for sharing!
9:41 AM