August 18, 2010
I met Stephanie years ago in New York City when her first book, AROUND THE BLOC, came out.  It was the first book of my monthly Latina Book Club.  She came and spoke to our group, and blew us away.  I have never met a more charismatic person.  I wanted to follow her on her adventures right then and there, but I couldn't -- life, love, work, no dinero.  So now I join Stephanie's adventures from my armchair.  ---mcf 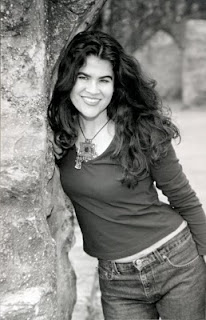 Q:   Tell us about yourself. Where are you from? How are you getting all these grants to travel and write?

I am from Corpus Christi, Texas (or, as I prefer to call it, Corpitos), but much of my life has been spent on the road. (My great-great Uncle Jake was a hobo who saw America with his legs dangling over the edge of a freight train, so wanderlust is encoded in my DNA!) My journey began in 1992, when I attended a high school journalism conference in Washington DC that featured a keynote by a rockstar foreign correspondent for CNN. He had covered the fall of the Berlin Wall and the collapse of the Soviet Union, riots and revolutions. When he finished, I ran up to the microphone and asked how I could be a foreign correspondent just like him. "Learn Russian," he said. So I did. In 1996, I jetted off to Moscow and haven't stopped traveling since. I’ve explored 35 countries and 48 of the United States thus far, but while wanderlust sparked my interest in travel, activism fuels it. I’ve stumbled upon outrageous injustices in this world, and the only way my conscience will allow me to depart is by writing about it.

As for the dinero to do this, I have something marvelous to disclose: You don’t need to be rich to travel, just resourceful. For starters, there are loads of travel grants, scholarships, and fellowships out there, from the Henry Luce Scholarship to the Fulbright to the Rotary Club. If you crash on people’s couches <<http://www.couchsurfing.com/>> or in airports <<http://www.sleepinginairports.com/>>, eat street food, and avoid Western Europe, you’ll probably spend much less than if you stayed here in Los Estados Unidos. You’ll also have far more adventures.

Q:   Tell us about your new anthology, The Best Women's Travel Writing 2010. Where did the idea come from? How were authors selected? Is that an annual book?

Travelers’ Tales has been publishing its Best Women’s Travel Writing series annually since 2005. Each year, they receive thousands of travel stories from around the world, and they sent me the top 100 by women in a great big box. I, meanwhile, solicited nominations from numerous venues (including WorldHum.com and PerceptiveTravel.com); placed calls for submissions on scores of listserves and websites; and recruited from several MFA programs. I must have read 200 stories in all, which was truly a joy. One minute, I would be romping around a rainforest in Borneo; the next, I’d be tango dancing in Buenos Aires. I retired each night exhausted from all my vicarious adventuring. Editing an anthology is rather like being a midwife, easing each story’s passage into the big, wide world and smacking out its first breath.


Q:   The anthology just won a Gold Medal in the Independent Publishers Book Awards. Congratulations. What other awards have you won for your writing?

Oh dear. Bragging makes me blush! But okay, since you asked: AROUND THE BLOC was named Best Travel Book of 2004 by the National Association of Travel Journalists of America; 100 PLACES EVERY WOMAN SHOULD GO won the Gold Prize in the Lowell Thomas Travel Journalism Competition and BEST TRAVEL BOOK in the 2007 Latino Book Awards; and MEXICAN ENOUGH won the Richard J. Margolis Award for Social Justice Reporting as well as the 2009 PEN Southwest Nonfiction Book Award. I can’t stress enough my gratitude for this: the literary dioses have been so kind.

Q:   Your first book, AROUND THE BLOC, was about your trip to Russian, China, and Cuba and was followed by MEXICAN ENOUGH, about your trip to Mexico in search of your roots. Are you on a quest to go "around the world?" How can we join you?!
I am indeed, and you can be too! The best way to start is just that: START. All too often, traveling gets postponed. We wait until graduation to commence our big adventure. We wait until we’ve paid off our college loans. Until we’ve paid off our mortgage. Until our ferns/Chihuahuas/kids are grown. The root of our procrastination is usually fear. We are afraid of getting lost on the open road. Of growing lonely. Of getting mugged, kidnapped, raped, killed. I have embarked on six major journeys and—in the days before my departure—honestly believed I would never return. So I wrote out my will. That’s right. At age 36, I have six versions of my will neatly labeled and tucked in a drawer. Somehow, writing those farewells frees my mind and enables me to go.

Yet, the scariest part of traveling is everything you must do prior to boarding that plane: quitting your job, buying your ticket, subletting your apartment, shoving your stuff in storage. But once you have physically boarded that vessel, you’re golden. You’re ordering margaritas, flipping through guidebooks, drawing up plans, dreaming. And then you’re stepping off that plane and beholding the jungle, the ocean, the mountains. The glorious people you’ll soon be meeting. Before you know it, you’re traveling; you’re transcendent. You’re one with Madre Camino.

I am a literary masochist. As soon as my eyes open (generally between 8 - 9 a.m.), I wash my face, brush my teeth, plunk down at the desk, and stare at the computer screen until I am literally passing out from hunger (generally between 12 - 2 p.m.). Then I cook some oatmeal, go for a bike ride or yoga class, check email, and -- if I can stand it -- write another hour or two. After dinner, I edit my day’s work, then read until my eyelids droop.

Q:   What advice do you have for aspiring authors?

Deeply reflect upon why you want to do this. Fame and fortune cannot be part of the equation -- and frankly, neither can publication. You must believe in the story you have to tell, and be whole-heartedly convinced that it will change the perceptions and perspectives of others. These are the only goals that can justify the immense work involved in this business.

If you decide to go for it, build a community. If you don’t know any writers, go to conferences or join a group and befriend some. Seek out mentors. Whenever you read a wonderful book or article, send its author a note and -- if they live close by -- an invitation for a cafecito. Sell yourself and your ideas to editors, agents, and publishers. Follow up on every lead and jump on every opportunity. Always write thank you letters to those who help you along the way. Learn from your mistakes, celebrate your successes, and above all -- enjoy the journey. You are a thinker, a storyteller, an artist, a traveler, a writer: OWN IT!


Q:   Who are the authors / books that have inspired you?

Aye, so many! Let’s start with Alma Guillermoprieto and Elena Poniatowska. Everything they write is genius, but I especially admire Guillermoprieto’s essay collection "The Heart That Bleeds," and Poniatowska’s novel TINISIMA. I’m also a big fan of authors who write about Mexico and/or the borderlands, including Luis Alberto Urrea, Ruben Martinez, Sandra Cisneros, and Gloria Anzaldua. Other heroes include Sherman Alexie, John McPhee, and Jon Lee Anderson. And no collection is complete without a few volumes of Anton Chekhov.

Q:  What are you writing now?

I just finished an investigative piece about colonias, the unincorporated plots of land found on either side of the U.S. – Mexico border. Hundreds of thousands of people (the bulk of whom are Mexican or Mexican-American) inhabit these communities, which often lack electricity, running water, and sewage. My essay focuses on colonias around Corpitos. Not only do the residents there live in abject poverty, an unusually high number suffer from cancer and asthma, and the birth defects there rate among the highest in the nation. I’m trying to determine why, and have a sneaky suspicion that the nearby refineries, prison, and waste dump have something to do with it.

You can always find me at my website, http://www.aroundthebloc.com/, and I recently started a blog about travel, writing, books, and combos thereof, at http://aroundthebloc.wordpress.com/. Drop on by; I’d love to hear from you!♥