Catherine Mayo was born in El Paso, raised in Northern California, educated in Chicago and has lived in Washington DC and Mexico City for many years. Many people think she is Chicana, but she is actually of Scotch-Irish-English heritage, with a smidgen of German. Catherine speaks Spanish and has translated many Mexican poets and writers under the name of C.M. Mayo. She also published, Tameme, a bilingual literary journal (www.tameme.org), now a chapbook publisher.
“Over and over,” says Catherine, “I have found such a generosity of spirit in this [Latino Literary] community, and so many superb writers and poets, and now so many friends, I cannot help but feel a part of it.”
Mayo’s THE LAST PRINCE OF THE MEXICAN EMPIRE was selected as one of the best books of 2009 by Library Journal. And her novel SKY OVER EL NIDO, won the Flannery O'Connor Award for Short Fiction.
This week, the Spanish version of THE LAST PRINCE is being released in Mexico.

Q:    Tell us about the book. Did your story begin with a character or a theme?

THE LAST PRINCE OF THE MEXICAN EMPIRE is based on the true story of Agustín de Iturbide y Green, who was born in Mexico City in 1863. His mother was an American from a prominent Washington DC family (her gandfather a hero of the Revolutionary War), and his father a Mexican diplomat, the second son of Mexico's "El Libertador" and first emperor, Agustín de Iturbide. You might find Agustin de Iturbide y Green's portrait quite surprising. You can view the "carte-de-visite", as they called the collectable photographs then, here: http://www.cmmayo.com/last-prince-photos.html The way he is dressed, like a girl, was the custom then.

It was taken probably in the fall of 1865, when Maximilian von Habsburg, the ex-Archduke of Austria placed on Mexican throne with the backing of the Church and invading French troops, made the little boy an "Imperial Highness" and brought him into his court. As Maximilian had no children, to all appearances, the child was his heir presumptive.

It's a true and very strange story. I found it quite an adventure to research because unfortunately, or fortunately for me, the main works on Mexico's Second Empire or "French Intervention" of the 1860s have many of details about the little prince all wrong (date of birth, names of his parents, the reason for the whole thing, etc). It took me many years of original archival research to unravel the story--- and quite a story it is, as the prince's mother tried to get him back from Maximilian, and after he had her arrested and expelled from Mexico, she went all the way to Washington, to meet with the U.S. secretary of State, and then Paris, to meet with the U.S. ambassador there, to try to exert political pressure on Maximilian. I even found a front page story in the New York Times from 1866 about the matter in which the "so-called" Emperor of Mexico is accused of kidnapping an American citizen!


Q:   Mexican history is rich and varied. What is it about this period of "The Second Empire" that attracts you? Why this "prince?"

Because I'm married to a Mexican--- we're about to celebrate our 25th anniversary-- so I don't have the usual "expat" experience living in Mexico. From my first moments in Mexico City, I realized that the popular image we have of Mexico in the U.S. and Canada does not reflect the immensity of Mexico's complexity. For me, being a writer is about exploring complexity, creating beauty, and telling the truth. In the novel's epilogue I talk at length about "the story of the story" but, in a nutshell: I just felt a strong intuitive pull to write this story. It needed to be written and I needed to do it. I had some special advantages: both languages, plus an ability to read French, and when my husband's work took him there, a long period in Washington DC where I could go into the archives. Surprisingly, the archives of the Iturbide Family, Agustín de Iturbide y Green, and the Emperor Iturbide are not in Mexico, but in Washington DC.

Plus a key part of the story is the story of the prince's American mother--- who she was, who her family was, what that meant, and why that mattered. As I mentioned, her family was well-known in Washington, and our capital then was a far smaller and more conservative place. The "belles" of society mixed with the diplomatic corps-- it was a far more socially rigid Washington than the one we see today. Also, unusually, her family was Catholic. So I had a lot of work to do reading about all that in the wonderful library of the Historical Society of Washington DC.


Q:    Share with us a couple of things that most people don't realize about Mexican history.

"Cinco de Mayo" is not Mexico's Independence Day, but the celebration of the (temporary) victory over invading French Imperial forces at Puebla in 1862. And many even very well educated people know nothing about that period, the so-called French Intervention or Second Empire under Maximilian von Habsburg.


Q:   You wrote a non-fiction book about Mexico and its history, MIRACULOUS AIR: JOURNEY OF A THOUSAND MILES THROUGH BAJA CALIFORNIA, THE OTHER MEXICO. Why is THE LAST PRINCE fiction?

My travel memoir is an exploration: what and who I encountered on my travels, and what I thought about them. But [THE LAST PRINCE] needs to answer an entirely different set of questions. Why did Maximilian come to Mexico? Why did Maximilian take the Iturbide child? Why did the Iturbides agree (at first) to sign his contract? And why didn't Maximilian want to give the child back? These are all questions impossible to answer without an understanding of the main personalities and their (oftentimes far from obvious) motives. Put another way, these are all matters of character and emotions, and for this kind of exploration the novel, as a form, is unsurpassed.

I think of the form as a kind of vivid dream or, to use a more modern term, "virtual reality"– it allows you to experience what it would be like to, say, come into the parlor and sip ginger tea and pass around a carte-de-visite; dance at a ball; push through a cheering crowd; smell of the razor-sharp air in a pine forest. And this very vividness is what invites people, I hope, to feel more empathy with the people in this time, this place, and caught in these situations.

I’m not saying I want the reader to approve of any of this, but to come into the experience of it, and so understand it all a little better.  It is, after all, a crucial and devastating episode in Mexican history, and its resolution-- Maximilian's execution and the establishment of a Republic--- a key part of the story of what it means to be Mexican.♥ 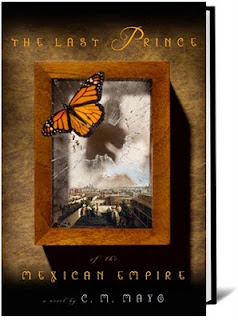 THE LAST PRINCE OF THE MEXICAN EMPIRE
Unbridled Books, 2010

SUMMARY: C.M. Mayo takes a footnote in history and turns it into an epic novel. Set in 1864, the archduke of Austria, Maximilian von Hapsburg – with help from Napoleon – becomes emperor of Mexico. Childless, Maximilian and his wife adopt a young boy named Agustin. Soon the two-year-old becomes a political pawn. When his parents object and demand his return, they are exiled from Mexico and so begins an international tug of war.


BLOGPOST ABOUT THE IMPORTANCE OF SEPTEMBER 15
http://madammayo.blogspot.com/2010/09/september-15th-in-mexico-of-1865.html


PODCAST BEFORE LIBRARY OF CONGRESS
http://www.cmmayo.com/last-prince-library-of-congress.html