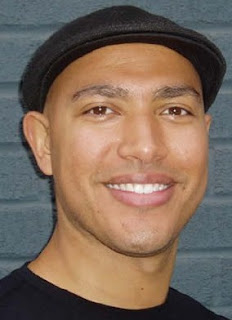 "Torrey Maldonado’s SECRET SATURDAYS
ought to be required reading at middle schools everywhere.”
—E.R. Frank, author of the acclaimed LIFE IS FUNNY
and AMERICA, which inspired the Lifetime movie.
SECRET SATURDAYS is a fast read, entertaining and it also equips
pre-teens and young adults to better handle everyday challenges.
—Library Media Connections
Torrey Maldonado is a teacher, a father, a writer, and a fierce hand ball player. His first young adult novel SECRET SATURDAYS was released from Putnam Juvenile this past April. Like the characters in his book, he too grew up in Red Hook, a poor, violent section of the Brooklyn. Raised by his mother, he went on to get a B.A. in Sociology from Vassar College and a Master’s Degree in Educational Administration from Baruch College. Torrey has taught in New York City’s public school system for 10 years. SECRET SATURDAYS was inspired by his experiences with youth, city schools, fatherlessness and poverty.
Torrey just attended his first Brooklyn Book Festival as an author. See his reading trailer at the end of this article.
Q:   Tell us about yourself. What do you do when you are not writing?
In the Q & A segment of one of my recent author-visits, a physically fit counselor began side-talking with a teen then asked me, How much of SECRET SATURDAYS was real for you? I assumed he was curious about my being raised by a single-mom in one of Brooklyn’s most violent and neglected housing projects. Or maybe he wondered how I overcame what I call the boy crisis to help his youth overcome the same pressures on SECRET SATURDAYS’ characters to be hard, non-academic, and run with the pack. Those facts about my life are true. This counselor cleared up my assumptions when he got laser-specific and asked, For fun, do you play handball like Sean in the book? Its hilarious how many readers ask that. Why are so many people shocked that a young novelist’s downtime sport would be handball? When I said, I’ve played since age ten, he challenged me right there to a game and we played that day. At first, the youth whispered on the sidelines that I was toast. Once we started thwacking that ball though, they were speechless. How’d that game end? The counselor told me, You play as well as you write and he gives SECRET SATURDAYS five stars. Those youth now want handball lessons from me when I’m not writing.
Q:   Why do you write? 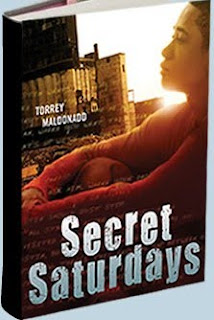 As a boy, I wrote to distract my mind from the rough realities of my neighborhood and schools. Writing helped me with my problems but it also brought new problems. There was great pressure for me to follow the crowd and the crowd felt writing equaled school and school equaled corny. Where I’m from, young female writers are called nerdy but boys get called “soft” because people think school’s a girl’s thing. I never stopped writing though and it paid off. People around me mistook me writing as “soft” but writing turned out to be hard enough to smash my chains of poverty. It helped me avoid ending up dead, in jail, on drugs, or living below my full potential. Now, I write a lot to help young people also improve their lives.
Q:   Give us a brief summary of your book, SECRET SATURDAYS. Where did you get the idea? Why a novel for Young Adults?
SECRET SATURDAYS is an urban fiction novel that follows the close then changed relationship of two male best friends, who are both half-Puerto Rican and half-Black, as one adolescent spins out of control. While it’s set in an urban environment, people from across our country from diverse backgrounds from adults to pre-teens email me to say SECRET SATURDAYS resonates with them. Why? SECRET SATURDAYS contains universal themes. We all have dealt with bullies, friendship challenges, tough choices, and the struggle to be our true selves. It’s sex-free and curse-free and that’s because my students’ parents complain that their youth are bombarded with profanity and x-rated images. Booklist praises SECRET SATURDAYS as infectiously readable and parents and youth agree and I’m ecstatic because they’re saying clean here is far from corny. I also penned this novel to solve two problems I’ve seen in my thirteen years as a conflict resolution trainer and teacher. First, youth still struggle with issues I faced as an adolescent. Second, in appalling numbers youth either dislike reading or a lot of their favorite books don’t make their lives easier.
Q:   Who are your favorite writers? What are you reading right now?
If I could put books in someone’s hand and say, Here, these books capture how young people speak, Id give them E.R. Franks book AMERICA and Jack Gantoss book JOEY PIGZA SWALLOWED THE KEY. I’ve read the following books by these authors and if someone recommended their latest book, I’d rush to buy something from J. K. Rowling (HARRY POTTER), Dan Brown (DA VINCI CODE), Rick Riordian (THE LIGHTNING THIEF), Marianne Williamson (A RETURN TO LOVE), Echart Tolle (A NEW EARTH), Jarvis Jay Masters (FINDING FREEDOM), and Paulo Coelho (THE ALCHEMIST). The best books do the following things for me: They make me forget my appetite, the time, and where I’m sitting. Their scenes stay in my mind how scenes from great movies linger. Third, the writing is like my favorite food and I need to read just one more page like I need to take just one more bite. I savor a few books at the same time so right now I’m reading HARRY POTTER AND THE CHAMBER OF SECRETS to my two-year old daughter. I just finished Jack Kerouacs DHARMA BUMS and I’m eager to begin President Obama’s DREAMS FROM MY FATHER because among our other similarities were both fatherless dads trying to change that trend.♥
FOR EXCERPT
http://www.torreymaldonado.com/books.html

FOR TRAILER OF TORREY’S READING AT THE BROOKLYN BOOK FESTIVAL
http://www.youtube.com/watch?v=Okz6OJDJ1H8