THE FIRST PUERTO RICAN WOMAN ON A STAMP 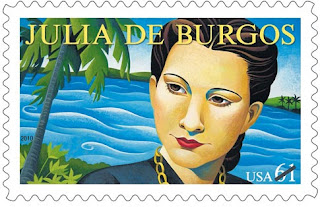 On September 14, in a ceremony in Puerto Rico, the U.S. Postal Service released the JULIA DE BURGOS commemorative stamp.  It is the 26th stamp in the USPS' literary series.

de Burgos is a renowned island poet, who won fame after dying nameless on the streets of East Harlem in 1953 at the age of 39. Her first verses were published when she was 19; Her best-known poem is “Rio Grande de Loiza.” de Burgos left behind a legacy of more than 200 poems, exploring issues of love, feminism, and social equality. Today, there are two Julia de Burgos Cultural Centers: one in East Harlem and the other in Cleveland.

Click below for other articles on Julia de Burgos and her commemorative stamp.


UPDATE:   Julia de Burgos is the SECOND Puerto Rican to be honored with a stamp.  The first was none other than former Governor and "Father of Puerto Rico" LUIS MUNOZ MARIN.  His stamp was issued in 1990.  For more about Munoz Marin and his stamp, click here.

Many thanks to Peter Quinones for letting us know.

Peter Quinones said…
Sorry guys, Julia de Burgos is not the frist Puerto Rican on a US stamp. I believe that honor goes to Luis Munoz Marin. His stamp came out in February of 1990. It was a 5 cent stamp.
Just go to Google and type in Munoz Marin stamp and you can see the red stamp. Peter Quinones from City island
7:55 PM

Native NYer said…
Peter-- thank you for the update. I was googling for other Latinos on stamps and couldn't find any. But it's wonderful to know that there are TWO Puerto Ricans so honored.

Unknown said…
Hey, Roberto Clemente was also on a stamp - wasn't he numero dos!
10:54 AM