YA BOOK: LAST NIGHT I SANG TO THE MONSTER 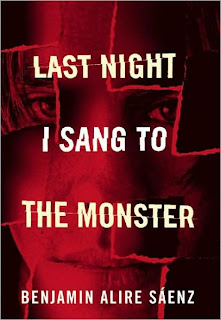 
Saenz captures the vulnerability and defiance of youth beautifully in his latest novel.  It is a poignant, heart wrenching and, sometimes too realistic, reflection of our society. It’s the story of a boy -- yes, an 18 year old is still a child -- struggling to survive his family, his hormones, his addiction, his life.  It’s also a story about the importance of family, either the one you are born into or the one you welcome into your life.


SUMMARY:    At 18, Zachariah “Zach” Johnson Gonzalez wakes up one morning with a hell of a hangover and no memory of how he got to Cabin 9 in a rehab center. And, he doesn’t want to remember….not his alcoholic father, manic-depressive mother, abusive older brother, nor the “monster” he drank to forget. Slowly with the help of his therapist – he’d rather have a dog! – and, the help of his newly adopted family, his cabin mates, Zach begins to remember and to heal.

Benjamin Alire Saenz is an artist, poet, novelist and a writer of children’s books. His first novel, SAMMY AND JULIANA IN HOLLYWOOD, was a finalist for the LA Times Prize and a YALSA Top Ten Books for Young Adults pick in 2005. He has been awarded a Wallace Stegner Fellowship in poetry, a Lannan Poetry Fellowship, an American Book Award, The Paterson Book Prize, the Americas Awards, the Tomas Rivera Award, the Southwest Book Award, and has been a finalist for the Los Angeles Times Book Prize. Some of his books include: CARRY ME LIKE WATER, HE FORGOT TO SAY GOODBYE, A GIFT FOR PAPA DIEGO, THE DOG WHO LOVED TORTILLAS. His fifth book of poems, THE BOOK OF WHAT REMAINS, was published earlier this year.
His new novel, LAST NIGHT I SANG OT THE MONSTER, is a finalist of the PEN USA Award in the Young Adult category, and was named one of the best books of the year by School Library Journal.


COMMENT:   Have you read Zach's story?  Let us know what you thought.