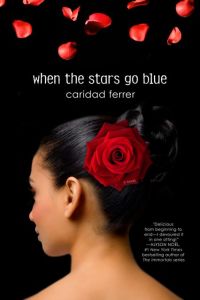 
I've never been in love.  Aymadredediosomigod.  I couldn't believe I'd said it. But what else could it be? This odd, terrifying feeling of falling down Alice's rabbit hole into this unknown world.  That made me want to laugh and cry and want to throw up and wrap myself in everything Jonathan represented all at the same time.
--Soledad Reyes


Does anyone remember that Brooke Shields movie, “Endless Love?” What about Donny Osmond’s “Puppy Love?” They were both about the wonder of first love – the joy of that sweet first, the heated passion, the intensity of emotion.

Teens and hormones are a combustible combination and that is what Caridad Ferrer has given us in WHEN THE STARS GO BLUE; Her daring third Young Adult novel about a dancer and a musician, who discover love amid the competitive atmosphere of the drum and bugle corps.

Soledad Reyes lives and breathes dancing. A high school senior, her plan is to teach while auditioning for professional dance companies. Enter BMOC Jonathan Crandall with a proposition—He wants her to play the sultry gypsy Carmen from the opera for his drum and bugle company. It’s an opportunity too good to pass up, and the chance for the new sweethearts to spend the summer together.  Everything is almost perfect, except for the lack of privacy on the road, Jonathan’s cantankerous father and a sexy soccer player with his eye on Soledad. Suddenly it all goes wrong as love turns to betrayal, and Soledad’s life and dancing career are changed forever.

This book is Fabulous. A must read. And the climax will knock you off your seat. Read it and tell me if it doesn’t. The book doesn’t come out until November 23, so mark your calendars to grab a copy then.

I asked Caridad about where got the idea of using the opera Carmen in her story and why the drum and bugle corps. Check out her answers below. You will be amazed at the breath of talent in this author. She must be a prima!

Why Carmen the opera? What does that opera say to you?

Honestly, because an editor suggested the idea to me. But being already familiar with the story, it was the sort of idea that made me go, "Oye, now why didn't I think of that in the first place?" Because seriously-- it's the kind of story that has EVERYTHING. It's got drama and intrigue and romance and betrayal and devotion. It's the kind of story that really sinks in and speaks to that dark, intense place in my soul. That I try to recreate with words I hope touch the reader. And musically, it's one of the most magnificent scores ever written-- and the passion inherent in the music is just the perfect inspiration for writing a story.


When did you conceive the idea of using the drum corps? And didn't you say you were in one? Tell us a little about that and your "role" in the corps.

Drum corps was a huge part of my life as an adolescent. It's an intense, all-consuming love affair, when you're involved in the activity. I was in the Florida Wave Drum & Bugle Corps, based out of Miami/Ft. Lauderdale for three years. We were a small, perpetually broke corps who went out and played our butts off, every single night. For one year, I was in the horn line, playing soprano bugle, then for two years, I was part of the percussion line in what's known as the "pit crew," the musicians on the sideline who play the keyboard percussion instruments as well as all of the incidental percussion. (One year, we even played steel drums!) As far as using corps for STARS, I'd known for a long time that I wanted to write a story set against the backdrop of the activity-- once presented with the idea of recreating the Carmen story for a contemporary audience, it seemed like a perfect fit for a few different reasons. One, it's a popular score for band/corps interpretation and has been performed time and again. And I knew that I didn't want to simply rewrite the story in a contemporary setting-- I wanted to put my own spin on it and allow it to stand on its own and using the drum corps as a background allowed me that freedom. Literally, I was able to employ the literary device of the "play within a play." Once I made those decisions, it all seemed to fall into place pretty easily.


Why the YA market? What is it about this age group that attracts your writing?

I'm sort of an accidental YA author, honestly. My agent at the time had been shopping an adult manuscript of mine when she heard an editor wanted a Latina-themed YA and asked if I wanted to give it a go. I did, and the rest, as they say, is history. That book became ADIÓS TO MY OLD LIFE, my first published novel, which went on to become a YALSA Popular Paperback for Young Adults, as well as winning the Romance Writers of America's RITA for Best Contemporary Single Title Romance, which was a HUGE honor, since that was an award for adult novels and I never expected that my YA even stood a chance. Which goes to show, a lot of adults are reading and loving YA and it's a great time to be writing it. And I'm so fortunate that my voice seems well-suited for the types of YA that I write, which are skewed a little older, in terms of character ages, and aren't necessarily focused around school-settings, but more about the big transitions in life, when you're hovering on that cusp just between adolescence and adulthood. You're making a lot of changes, some good, some bad, and life is as much about what's going on in your head as it is about what's going on around you. Given that I'm drawn to more introspective, character-driven pieces, I find it a fantastic age to explore.

Caridad Ferrer’s first novel, ADIOS TO MY OLD LIFE, won a RITA Award for Best Contemporary Single Title Romance, as well as being named to ALA’s 2009 Popular Paperbacks for Young Adults List. Her third novel, WHEN THE STARS GO BLUE, will be released in late November. Caridad lives with her family near Seattle, Washington. Visit her at http://www.caridadferrer.com/. 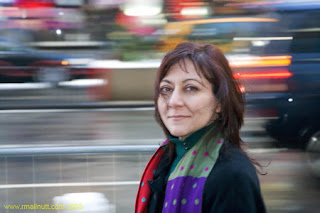 COMMENT:   Do let us know what you think of WHEN THE STARS GO BLUE and ADIOS TO MY OLD LIFE. Also, let us know of other Young Adult novels that have touched you.  Happy Reading!

Selah March said…
Pssst. When the Stars Go Blue will be Ferrer's third YA release. She's also written It's Not About the Accent for MTV Books.

Book Club Reviewer said…
I've read "Adios to my old life," and I liked it! If you would like one of the reviewers at Livin' la vida Latina to review your book, Caridad, just send them an email.

Unknown said…
The language of the book seems to be very visually striking. I am definitely going to add it to my bookshelf!
10:02 PM