May 30, 2011
Today is a day to remember our Soldiers and thank them for the freedoms we enjoy.
Here's a group that will NOT be forgotten, ever. 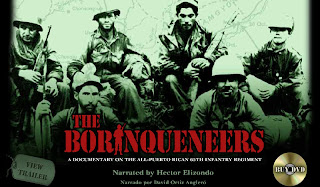 
The 65th Infantry Regiment was created in 1899 by the U.S. Congress as a segregated unit composed primarily of Puerto Ricans with mostly continental officers. The 65th fought in three wars: World War I, World War II and the Korean War. The unit was nicknamed the “Borinqueneers” after the island of Puerto Rico. The native Taino Indians called their island Borinquen, which means “land of the brave lord.”

The 65th performed impressively in all the wars, particularly the Korean War for which they earned high praise from General MacArthur for always giving 200%. The 65th Regiment showed outstanding resilience and legendary fierceness as combatants, even as they faced discrimination within the Army.

In the fall of 1952, the Borinqueneers were at the center of a series of dramatic events that threatened their very existence. At the heart of it all, the fact that because Puerto Rico is only a commonwealth, its men could be drafted but they could not vote in the U.S. elections. And although thousands of Puerto Ricans have served courageously in the Armed Forces since WWI, their contribution and sacrifices have gone largely unnoticed.

The film, “The Borinqueneers,” explores the rich history of this unique regiment and its darkest hour through extensive historical research and interviews with over 250 veterans and commanding officers from the U.S. and Puerto Rico.

“The Borinqueneers” one-hour television version is being shown on PBS. See http://www.pbs.org/ for listings. To order the FULL documentary and find out more about the 65th Regiment, visit http://www.borinqueneers.com/.

MIL GRACIAS A TODOS LOS VETERANOS.
QUE DIOS LOS BENDIGA.
.
THANK YOU TO ALL THE VETERANS
And to the men and women who continue to serve to protect our Liberty:
God bless you and bring you safely home.

Unknown said…
Minorities in the U.S. like the Borinqueeners have served their country valiantly despite a long history of prejudice. They risk their lives for the ideals this nation represents. These are the "real Americans," not those who wrap themselves in the flag, display patriotic bumper stickers while letting other people's children put themselves in harm's way. You know who I'm talking about.
11:47 AM

Laura Aldir-Hernandez said…
Great day to recognize our Puerto Rican veterans! There are so many, and this group seems to warrant more attention in particular. Good choice for a post.
12:16 PM

Unknown said…
What a great post for Veterans Day. My Grandfather fought with the 65th Infantry during World War II. He never spoke of his service so I never knew what a courageous hero he was until after he had passed away.

It was while researching for special present for my father, a personalized scrapbook album that I grew to respect him more than he would ever know.
12:40 PM