The Latina Book Club is pleased to introduce our Guest Blogger, author Mayra Calvani, on writing and beginnings.  Welcome, Mayra.

DAY ONE:   BEGINNINGS
By Mayra Calvani

From the time I was about eleven, I loved writing stories. Writing fiction was my special talent, what made me stand out among my peers. Later, in my mid-teens, I seriously began picturing myself as a published author. The possibility of holding my own book in my hands and seeing it on bookshelves was a thrilling fantasy to have. I remember being asked in class what we planned to do with our lives. We were supposed to stand up and answer and, of course, I answered ‘I’m going to be an author.’ Agatha Christie was a big influence back then. I think I had read all of her novels by the time I turned fifteen. In those days, I also read a lot of Barbara Cartland and Janet Daily. I gobbled up their books and dreamed of becoming a known author just like them some day.

I wrote my first novel when I was fifteen. It was a Harlequin-type romance. However, that isn’t the book I’ll be discussing here because, naturally, that one never got published! It just ended up being passed around the class (behind our teacher’s back) and guiltily devoured in secret by my friends. I wrote many short stories and another novel during my early twenties, but it wasn’t until I was twenty four, that I sat down to really write a book intended for publication. Back then, the novel was titled AT THE TIME OF DINOSAURS, and it was a parody/satire about the artistic scene in San Juan, Puerto Rico, where I grew up.

The conception of this book stemmed from two factors: my personal observations of Puerto Rican artists when I was a teen and my love for satiric writing. My mother was-and still is-an artist, and although she’s ‘retired’ now, back in the early eighties she was an active painter in San Juan, showing her works at art exhibits and galleries regularly. She took me everywhere with her, so I attended all these shows and activities and I observed.

Let me tell you something, the art scene can be extremely interesting and that is because so many artists are eccentric, unconventional people. There’s so much competition, jealousy and gossip! Anyway, I guess all these experiences must have made an impression on me. When the time came to write my book, I knew these were the people and situations I wanted to write about. I decided I would make the book a parody, this way I could keep it upbeat and have the freedom to exaggerate to the point of being ridiculous. I was sure an upbeat, sharp, satiric, darkly humorous style would be perfect for my novel.

Since that time, the novel has gone through two published versions. A final version, titled SUNSTRUCK, was published by Zumaya Publications in 2009.

You can read a review of SUNSTRUCK on The Compulsive Reader. ♥ 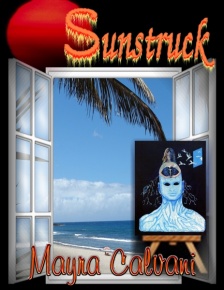 Twenty-four-year-old Daniella is an architecture student living with her narcissistic artist boyfriend in San Juan, Puerto Rico. Abandoned by her father at an early age, Daniella always falls for the wrong type of man. Her most enduring male relationship is with her 30-pound Turkish angora cat. Thankfully, Daniella has her mother…and her ex-husband Ismael, his rich wife fondly referred to as “Lady Dracula, and the ladies of The Praying Mantises.  Oppressed by all these crazed, eccentric characters, Daniella feels herself falling into an abyss. Until something horrendous happens and Daniella wakes up from her stupor to take charge of her life.

ABOUT THE AUTHOR:   Mayra Calvani writes fiction and nonfiction for children and adults. She’s co-author of THE SLIPPERY ART OF BOOK REVIEWING, a ForeWord Best Book of the Year Award winner. She’s had over 300 stories, articles, interviews and reviews published. In addition, she’s co-editor of Voice in the Dark ezine. A reviewer for more than a decade, she now offers numerous book reviewer workshops online. Visit her website at http://www.mayracalvani.com/. For her children’s books, visit http://www.mayrassecretbookcase.com/.