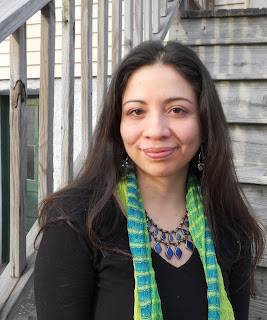 I wanted to write about a character with a Mexican-American mother and an Anglo father, because that was my experience and it made me feel special on the one hand, but also like I couldn’t belong fully to either group.--Toni

Q: Why short stories? You are an editor, why not a novel?

A: Well, the short answer is, because I didn’t have a novel! At least, not one I could publish. What I had was a collection of stories I’d written and rewritten over the years. It’s true that many publishers and agents encourage writers to write novels, as opposed to stories or (gasp!) poetry. Collections are hard to sell and I’ve never acquired or edited one at my job. But I'm really glad that I'm starting out with a story collection. It gives me a chance to get my feet wet, so to speak. I’ve acquired many first-time authors, but this is the first time I’m the author myself, so it’s still new in some ways. I look forward to coming out with my first novel one day, but I also think that I’m never going to stop writing short stories. I love reading them, and as long as that’s the case, I’m going to want to keep writing them and get better at writing them.


Q: Your new book is about going home and family connections. How does it feel to go back to the old neighborhood and catching up with family and friends? Is it awkward? welcoming? Can one go home again?

A: I love going back to visit my hometown in California. I can only manage to get back twice a year usually. I end up spending most of the time with my family. And I love my family. Your family is your family, you know? It’s really good to see friends too. Even though we don’t talk or write much while I’m away, when I see them, we’re still interested in each other’s lives and excited to catch up. The brevity of my time there makes it all the more special--I want to savor it as much as possible. Of course, it’s different. I used to drive all over the place when I lived there. Now when I go back, I’m dependent on others for rides. I’m in the role of the visitor. And there have been changes to the neighborhood, to Los Angeles, and even to the house I grew up in. At times, I’ve felt that everything should be the same as when I left it, but of course that’s silly. Life goes on. I’m just grateful that I can still visit and experience that feeling of coming home and belonging.


Q: When did you realize you were a writer?

A: I started out writing poems when I was, I’m not sure, 10 maybe? I wrote them throughout high school, filling up notebooks. I wrote some prose too, stories about girls my age. I really loved novels like Little House on the Prairie and Anne of Green Gables and Little Women. In junior high, I even wrote a play for me and my sisters and friends to perform and film with our camcorder. Our dad was a big reader and he would take us to used bookstores all the time. Our mom took us to the library. So there were always books around. Oddly enough, my sisters and I were even big letter writers. We had dozens of pen pals all over the country, and in some other countries too. No one else in my family really wrote poems or stories so writing was definitely a big part of my identity. That was firmed up in college, when I took fiction courses and received encouragement from my professors and classmates.


Q: Who, what inspired your characters?

A:   This collection basically grew out of a desire to share my world with the larger world. I was hanging out a lot with friends, playing pool and driving around and going to clubs, stuff like that, and they were clever and so much fun but also facing certain challenges. I didn't think that anyone had written about similar characters, or about our neighborhood, and it became important for me as a writer to attempt to capture the feeling of being in this particular time and place. So that was the initial inspiration. Also, I wanted to write about a character with a Mexican-American mother and an Anglo father, because that was my experience and it made me feel special on the one hand, but also like I couldn’t belong fully to either group. Ultimately, I think writing these stories was my way of trying to understand my own family and background.


Q: What do you want readers to realize about your book?

A: I just hope they enjoy it! If they end up taking more from it, that's great. I mostly wanted the reader to simply experience the characters, so I focused a lot on the physical action and dialogue. But I also get caught up in things like symbols and themes, so I have to be careful. I’ve been accused by my writing group friends of being too subtle. So if readers do happen to see underlying themes, within and across stories, that would be nice to hear! The book is already being picked up for a college class, so I’m very excited about that. If anything, I hope the book contributes to literature about the Latino experience, just by saying, “hey, here’s another experience of being Latino, and it’s different.”


Q: Your book won the Miguel Mármol Prize. What is that exactly? And how does it feel to know your first book won such an award and high praise from Sandra Cisneros?

A: Curbstone Press started the Miguel Mármol Prize in 2001—the press has since been bought by Northwestern University Press and is now their imprint Curbstone Books. The prize is for, here goes, “a first work of fiction in English by a Latina/o writer that reflects a respect for intercultural understanding and fosters an appreciation for human rights and civil liberties." Whew! Lorraine López was the first winner and I am such an admirer of hers. She’s so good and so funny! So to be in her company and in the company of Carla Trujillo, another amazing author, I feel incredibly honored. I heard that my collection had won and that it was going to be published and I really did feel that it was this life-changing event. I’d gone for my MFA and been wanting to publish a book for years and it was finally happening. When Sandra Cisneros gave me a blurb, I about wanted to cry. I just could not believe it. I think that as writers we all want to hear that what we’re doing is good and worth something, and Sandra's praise was the ideal affirmation. I have great respect for her, as a writer and as a person. I attend the Macondo Workshop in San Antonio, which is something she started and keeps going. She truly believes in nurturing and supporting writers.


Q: What are you working on now?

A: I'm working on some other short stories, some of which actually feature characters from The Bolero. I've been batting around a few ideas for novels for quite some time. I really haven't written much about New York, in all the time I've lived here, and now that the LA-based collection is coming out, I'm looking forward to writing about the culture here. It’s going to be fun.♥ 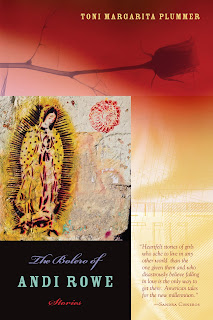 Book Club Reviewer said…
Congratulations, Toni! It's always inspiring to hear how an author got to their first book. We look forward to the day you write your first novel. In the meantime, we are jotting your name down on our list. We know our Latina readers would love to read an interview with you on our site. Would you mind answering a few questions for us? Our email is: livinlavidalatina@hotmail.com

Thelma T. Reyna said…
Wonderful interview with Toni. What a refreshing new voice! I recently obtained her book and am very eagerly looking forward to reading it. Thanks, Maria, for another enlightening peek into the heart and soul of a talented Latina writer!
2:57 PM