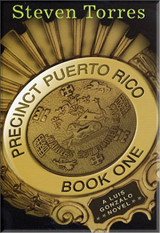 “Revenge is pointless. It’s like the candy the kids eat at the fiestas patronales—it tastes sweet at first, but it dissolves as you eat it and leaves you empty.”

“Can a gandule arrest a Metropolitano?”

This book had me at “Puerto Rico.” I admit it: I am a little biased for all things Puerto Rican, and this book does not disappoint. In fact, it reminds me of Tony Hillerman’s Navajo Tribal Police mystery novels in that the hero solves the crime because he knows his people, he knows his town. Same can be said of Sheriff Luis Gonzalo.

Luis Gonzalo is the Sheriff of Angustias, a small town whose whole police force consists of six officers and one squad car. Gonzalo is in Rincon, one of the bigger towns on the island on family business, when there is a ship wreck and bodies are washing up on shore. He jumps in to help rescue the victims and stumbles upon a ring of illegal trafficking in humans from the Dominican Republic. When he discovers that Puerto Rican cops are responsible for the murders of the illegal immigrants, Gonzalo finds his life and those of his wife and daughter threatened. When he refuses to give up his investigation—one other law enforcement agencies refuse to help solve—he finds his town under siege.


ABOUT THE AUTHOR:   Steve Torres is a native New Yorker but spent part of his childhood in Puerto Rico visiting family in small towns like the fictional Angustias. He also writers short stories and urban mysteries. For more information on the fifth book in his Precinct Puerto Rico series, visit him at http://www.steventorres.com/.