June 20, 2011
The Latina Book Club continues its Celebration of Men this month with a Q&A with author David Perez. He is a talented author with a funny “memoirito.”  Enjoy, and always, Read Latino! 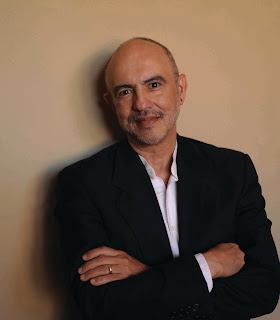 Q: Tell us about your book. How much is it about your childhood? What is pure fiction?

A: My book, WOW!, is a memoir, or rather a “memoirito” set in the 1960s about my coming-of-age in a tough South Bronx neighborhood while navigating an even tougher Catholic school. WOW! was the my first English word I learned when I was two-years old. I feel it epitomizes my character in the book: a Puerto Rican boy full of wonder.

I called my book a “memoirito” because of its novella length (only 128 pages) and because it’s written in an episodic style, much like the telenovelas my folks watched on TV, or those popular pocket paperback novelas in Spanish with illustrations. In fact, my book also has some illustrations, done by my brother George Pérez, an internationally acclaimed comic book artist. He did the cover too.

WOW! is entirely about my childhood, covering my life from the ages of ten through fourteen. One doesn’t ordinarily equate funny with growing up in the South Bronx, but my book is full of humor. When my family moved to the Millbrook Houses in 1959, the projects were sparkling new and considered “moving on up.” Still, there were changes in the air, many of them negative, and as a kid I saw and felt them. Despite this, my boyhood was filled with some hilarious adventures.

This book has been my sincere effort to record my childhood experiences. Some images were crystal clear; others dimmed by an aging brain. At times, I had conflicting versions of events from friends and family. So like all memoirists, I had to pick and choose. I downplayed some “facts” and highlighted others. But never did I make things up whole cloth, even though I do tend to embellish a tale. Just ask my kids!

A: The enthusiasm of some of the nuns when they taught religion was fun, even as I was baffled by the intricacies of venial and mortal sins, or the concept that God is eternal, that “He always was.” I liked the pomp and ceremony of receiving Sacraments. And the stuff my buddies and I did as altar boys! But you’ll have to read WOW! to learn more about that.

What I liked the least back then, to put it mildly, was the corporal punishment, particularly by the trio of desperadoes known as Brothers of the Sacred Heart who taught the all-boy classes at St. Luke’s Junior High School. Their arsenal included paddles, open slaps and bouts of psychosis. The nuns I had prior to middle school were tough too, but their teaching was laced with compassion. Let me add, however, that the Brothers also had their good moments, and we certainly learned the importance of studying hard and doing well in school.

In the end, there’s nothing startling in my story, and certainly no malice. The brutality at St. Luke’s was what it was at the time. Yet, as I tried to show, there was goodness and humanity.


Q: What/ who inspired your characters? 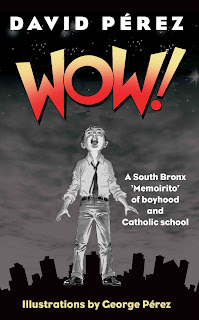 A: Some of the funniest guys I know are those I grew up with, guys who knew how to cut you with “snaps.” I describe in WOW! how my friends and I goofed on whoever got pummeled by one of the teachers at S. Luke’s, how we made light of the punishments as a sort of survival mechanism—although we didn’t recognize it as such at the time.

While the characters in my book are all from real life, I discovered in the course of writing that I couldn’t name all of them without weighing down the narrative with too many people to keep track of. At least that’s how it seemed to me. So I decided to focus on a few central characters, and in order not to unnecessarily startle an old friend, I purposely left out most last names. A couple of characters are composites.

My mother, father and brother are all characters in WOW! They’re totally real and my inspiration is drawn simply from our lives, as they were then, another layer in the multicolored experiences of Latinos growing up in the United States.


Q: You are a writer, editor and actor. What is your secret to time management?

A: I wish I knew, plus I don’t always manage it well. Nonetheless, most of the times I do find ways to keep a healthy balance. One asset is my years of journalism, a field where you don’t have time for writer’s block. You have to meet your deadline, and you have to get to the point with your article quickly and often concisely. In short, you have to be organized.

I’ve become very organized over the years and I know—most of the time—how to compartmentalize my work, be it editing an entire manuscript or doing Othello for a community theatre production. Whenever possible, I try to divide my day in segments: two hours of morning writing here, a few hours of editing for a client there, and making sure to parcel out time for exercise and time with family. I use a planner and yellow pads a lot, constantly going over my schedule, maybe even too much. I also have separate places for separate creative work, for instance a coffee shop to do writing, the library to do editing. All this is not to say I don’t blur the lines some times, when I scrambling to get things done. But I haven’t missed a deadline yet.

Acting, in my opinion, is an ideal complement to writing. While the latter is mostly solitary, acting is essentially collective. This isn’t 100 percent true, of course. Many writers nurture themselves in community through workshops, salons and conferences, and actors spend many a day alone going over lines, delving into character and so on. Nonetheless, acting’s multitudes of exercises can invigorate and inform your writing. This was certainly the case for me, especially when it came to doing public readings of my stories.

Finally, what’s worked for me is to always find time for peace and quiet. Sometimes the key to managing your time is to do nothing for a while, to listen to the quiet, to breathe.


Q: What authors would you recommend? What Latino authors?


ABOUT THE AUTHOR:   David Perez was born and raised in the South Bronx in New York City of parents of Puerto Rican descent. Growing up in the Millbrook Houses in the 1960s and navigating his way through Catholic school comprise much of the storyline for his memoir WOW! (11B Press, 2011). David has written hundreds of published articles for newspapers and magazines and is also a skilled editor. As an actor, he has appeared on stage, film and commercial print. He lives in Taos, NM with his wife, poet Veronica Golos, and is the father of two adult children, Belinda and Jase. His brother George (future comic book artist) illustrated the cover for WOW! Visit David at http://www.davidperezwow.com/.