The Latina Book Club is excited about Caridad Pineiro's new Sin Hunters series.  Actually, she has two new Sin series.  Learn all about them below.  And check out her new book trailer for THE LOST, by clicking here.  THE LOST will hit the book stores on July 26.

Q: Congratulations on your new series—The Sin Hunters. Tell us about the Light and Shadow hunters and this new world you’ve created for us. How many books will there be? Will Bobbie and Adam be recurring characters?

I’m very excited about this new paranormal series because it’s steeped in the history of the Americas, filled with characters with amazing powers and very sexy and romantic as well. The premise of the Sin Hunters is that the Hunters are a race that has existed on this planet for millennia, gathering energy and possessing a wide range of abilities due to that power. From shapeshifting to travel at the speed of light, the Hunters possessed incredible powers that they have kept to themselves for centuries. Occasionally the Hunters would breed with humans, creating hybrids who oftentimes possessed greater intelligence and strength. Because of that they often became the leaders and warriors of the humans.

When the Conquistadors landed on the shores of the Americas, they brought all kinds of illnesses to the indigenous people, including the Hunters. When smallpox contaminates the Hunters, it ignites a civil war between those who have survived the pox–the Light Hunters–and those who are forever blighted by the disease–the Shadow Hunters.

The hero in THE LOST, Adam Bruno, is an heir to this ancient race, although he does not know of their existence at the start of the story. All he knows is that he possesses unusual powers which have the capability of hurting others and he is trying to understand how to control those powers.

THE LOST (August 2011) is the first book in the SIN HUNTER series. The second book, THE CLAIMED, comes out in May 2012. I have plotted two more books and hope I have a chance to write them! As for Bobbie and Adam, you will see them in future books although those other books will have different characters as the main protagonists.


Q: You have two new “Sin” series. How do you keep them straight? Are the two Carrera families related? Are the series related?

Bobbie is the younger sister of Mick and Liliana from the earlier SINS series, but we will not be continuing that series at this time. You will see some of Bobbie and Mick in the SIN HUNTER Series so there is some relationship between the two, but the SIN HUNTER series is a whole new mythology. It is also much darker and sexier because the power of the Hunters just seems to lend itself to that kind of story.


Q: You’ve written women’s fiction, suspense and paranormal. What is your favorite genre and why?

I like to say that I write paranormal suspense and that’s my favorite genre. I love mixing up the elements of the two genres to create what I hope are very different books. It also allows me to go from one book that is more paranormal to another where the suspense drives the story. I hope readers like that change and that it keeps things interesting for them.


Q: My favorite series of yours – to date – is the vampire one, The Calling. What is happening with that series?

Thanks so much for the kinds words! THE CALLING has been very popular with readers and I’m very happy to say that it returns in January and February 2012 with two new books. Readers will see familiar characters as well as meet some totally new and unusual heroes. After that, I hope to spin the series off in a new direction with Diana and Ryder as the leads in future paranormal suspense stories. If I had to pitch it to Hollywood, I’d say, think Buffy meets the X-Files for the new spin on the series.


Q: What/who are you reading this summer?

I always have a stack of J.D. Robb books to catch up on. I soooo love the IN DEATH series. I am also addicted to Harlequin Desire and have a number of those novels to read. When not reading, I’ve got some new ideas I want to work on and I’m already itching to get going on them.

Thank you so much for having me visit with you and giving me a chance to chat about THE LOST and the SIN HUNTERS paranormal romance series.♥ 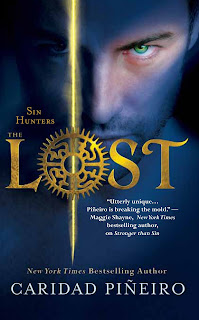 THE LOST
By Caridad Pineiro
Grand Central Publishing
Bobbie is an Iraq war veteran and she’s home from battle, but wounded both physically and emotionally. She’s busy trying to put her world back together and the last thing she needs is more conflict in her life. Bobbie’s challenge comes in the form of sexy millionaire Adam Bruno. Adam is different from any man she has ever met and Bobbie feels an immediate connection to him. There’s just one problem: Adam has no idea who he really is and why he possesses the ability to gather energy. That ability allows him to do a myriad of things, shapeshifting, to traveling at super speed, to wielding energy and light like weapons. But those powers are challenging Adam, because as they become more powerful, the also grow harder to control and deadly.

Enter Bobbie Carrera. Bobbie brings peace to Adam’s soul. Adam feels lost in the human world, but in Bobbie’s arms he finds love, acceptance and the possibility for a future he had never imagined. But before he can reach that future, he must deal with the present, and that means battling the evil Shadow Hunters and facing the shocking truth about his real identity.

And, here's the first book in the other Sin series:

SINS OF THE FLESH
by Caridad Pineiro 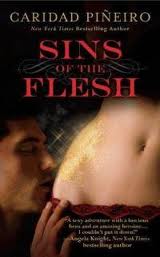 COMMENT:   Do let us know what your favorite Caridad Pineiro book is, and what you think about her new series, the Sin Hunters.

Caridad Pineiro said…
Thank you so much for having me hear and giving me an opportunity to chat about my latest release!
7:13 PM