BOOK OF THE MONTH: CONQUISTADORA…and …Q&A with author ESMERALDA SANTIAGO

Ana is a girl “cloistered and swaddled in the expectations of her class, but she identified with the audacity of the conquistadores, with the confidence that, if they turned their backs on country, family and custom, they could make fortunes and more exciting lives through the work of their hands, the might of their swords. The more she read, the more Ana longed for a world beyond her balcony….” 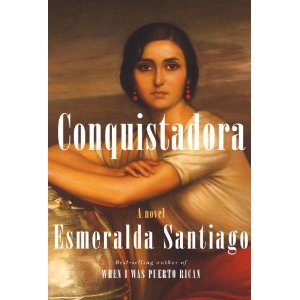 BOOK SUMMARY:   Gloriosa Ana Maria de los Angeles Larragoity Cubillas Nieves de Donostia – aka Ana – is a young Spanish senorita at the beginning of the 19th century. She discovers the diaries of her ancestors and is entranced by their stories of Puerto Rico and Ponce de Leon. Ana is eager to conquer worlds of her own and to visit the Caribbean paradise; she finds a way in the handsome Argoso twin brothers – Ramon and Inocente. She marries Ramon, the oldest, and the trio moves to a sugar plantation on the island. Ana’s dream becomes a reality, complete with the harsh truths and dangers of all it entails. But, like her ancestors, Ana perseveres and sacrifices all she has to hold on to the land that becomes her true home.

Q&A with the Esmeralda Santiago

Q: Publishers Weekly called CONQUISTADORA the Puerto Rican GONE WITH THE WIND. Does that scare you? flatter you? is Ana the new Scarlet?

A: GONE WITH THE WIND is a classic, so it's flattering that PW would compare the two books favorably. There are similarities between Ana and Scarlet. Both are strong women, they both love the land and mature by overcoming challenges and tragedy. But Scarlet primarily used her beauty to get what she wanted, while Ana used her intelligence and vision. Also I think that the slaves in CONQUISTADORA are not stereotypical. They are as heroic and flawed as the blancos.

Q: Your fans know you best through your biographies. CONQUISTADORA is anything but. Was it easy going from contemporaries to historical novels?

A: It was neither easier nor harder to write historical fiction after years of contemporary novel and memoirs, but it was different. The research was arduous and so interesting, that I frequently lost myself in it. Discovering the history of Puerto Rico was fascinating but often painful, especially the frustrating attempts to get Spain to pay attention to the residents' needs, the draconian laws to control slaves, the successful laws that controlled the thinking of those seeking independence and abolition.


Q: What kind of research did you do for CONQUISTADORA? What is the most interesting fact you learned about the period and/ or the island of Puerto Rico?

A: The research began before the age of Google. Every time I went to Puerto Rico, I returned to the US with boxes full of books, aware that it was difficult to find them back home. Many of those books are now out of print, and I'm fortunate to have many of them on my shelves. Once the technology caught up to my needs, I was able to find and send for other material through my local library system. As more material appeared on the Internet, I was overwhelmed by having too much information so readily available! It can get confusing when you have a torrent of material with no context, so digesting the information was time consuming.

The most interesting fact about the period on the island was, as I mention above, the effective ways that the Spanish government kept Puerto Ricans afraid of even thinking about independence and abolition. It's a lesson for today, when the media make it even easier to keep people afraid.


Q: What historical authors did you come across in your research that you would recommend reading?

A: Salvador Brau, of course, is an important author because he was writing about the times he was living. Also, Manuel Alonzo, EL GIBARO is necessary, again because he was writing in the period and gives us a portrait of the society at the time. I think these two books are essential to begin to get a sense of our history. I often consulted Fernando Picó's excellent PUERTO RICO: HISTORIA GENERAL as a starting point to find out what was happening on the island in the years my characters lived, then found more extensive information from his numerous books, and from others.


Q: How did it feel launching your historical novel on your home island of Puerto Rico? Did your family attend? Also, what is your favorite thing about Puerto Rico?

A: It was important that CONQUISTADORA be launched in Puerto Rico because I wanted mi gente to have the book first. It's about us, and about our island. I wanted Puerto Ricans on the island to know that they are always in my thoughts, and that even though I write in English, I'm writing about us.

My father attended the reading at Borders, and even though he's over 90 years old and is usually in bed by 8 PM, he stayed until the last person on line had received her book and signature because he wanted to experience the warmth and enthusiasm of the people there. He was very proud of the work I've done, and was moved by how kind and generous people were, how they tell me stories and appreciate the writing. He's been a poet all his life, but has never been published, so it's poignant for him to see his daughter with readers who can take her books home.

My favorite thing about Puerto Rico is its people — generous, optimistic, cheerful even in the midst of challenges and tragedies.

AUTHOR BIO:   Esmeralda Santiago is best known as the author of the memoirs WHEN I WAS PUERTO RICAN, ALMOST A WOMAN (which was adapted into a Peabody Award-winning film for PBS’s Masterpiece Theatre), and THE TURKISH LOVER. Esmeralda’s work has also appeared in numerous publications, including The New York Times and The Boston Globe. Born in San Juan, Puerto Rico, she lives in New York.  Visit her at http://www.esmeraldasantiago.com/.

When I Was Puerto Rican and Almost a Woman were 2 of my most memorable college reads. Who can forget "Ojo sé. Can. Juice. ¿Y?"? Finally, someone who had sung the same national anthem version that I had known as a child!