The Latina Book Club congratulates New York Times Bestselling Author Julie Leto on her new book, TOO HOT TO TOUCH, which will be released tomorrow, August 23. Run, do not walk, to your nearest bookstore for this book; then go home and enjoy. 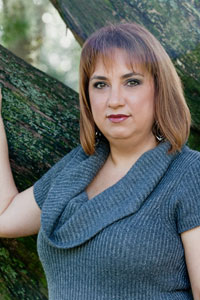 Q: Your books are hot, sexy and fun. Tell us about your new series and how you have incorporated those themes into it. What “legendary lovers” should we expect to “see”?

A: The heroes of this series are fictionalized descendents of Joaquin Murrieta, who was the bandit upon which the story of Zorro was based. Even before Antonio Banderas took up the cape and sword, I've been enraptured by this character! The skill, the finesse, the underlying sense of justice...it's just too romantic for a girl like me to ignore. In my stories, the brothers have inherited a ring that supposedly helps bring out their inner bandits. Of course, the women they meet don't hurt, either. The series is sexy and romantic and adventurous and fun...everything in keeping with that swashbuckling Latin lover.

A: Thank you! I started reading romance novels when I was 14 and a freshman in high school. My best friend took them from her older sister and we read them voraciously. It was that very same friend who suggested, years later when we were graduating from college that we try to write a romance novel together. We actually wrote two, but neither was published. She decided to stop writing, but I didn't. I kept writing and sold SEDUCING SULLIVAN, my first published novel, about ten years later. The best thing about writing series romance, especially for Harlequin, is the distribution. My stories are sold all over the world and are translated into so many different languages. For readers, I think the best part is that they are like concentrated bursts of romance. They're short, but they are intense. (Although I think people would be surprised by how short some of their hardcover fiction really is...there isn't that much of a difference sometimes!)

A: My favorite romance writers are so varied and many. For historicals, my new favorite is Tessa Dare. She writes charming, sexy historical romances set during the Regency period. For romantic thrillers, I love Leslie Parrish. She just grabs your stomach--and your heart--and holds them captive for 400+ pages. For young adult books, I love Diana Peterfreund. Her books are so smart. As for Latino writers, I have to go with Caridad Ferrer and Alisa Valdes-Rodriguez. You can't go wrong with either of them, no matter what they are writing.


Q: What is happening with your Marisela Morales “Dirty” series?

A: I'm so glad you asked this question! Just a month ago, I was able to resecure the rights to the Marisela series, meaning that the original publisher, Pocket (Simon & Schuster) has returned the rights to publish the books to me. I'm in the process right now of repackaging DIRTY LITTLE SECRETS and DIRTY LITTLE LIES for digital re-release! I hope to have them available for the Kindle, the Nook and other digital readers, by October. If the first two books find an audience, I'm going to write the third book, TALK DIRTY TO ME, which I have always wanted to do. I'm even having the cover designed in hopes that this happens!


Q: What are You reading now?

A: I just finished reading Tessa Dare's upcoming historical, A NIGHT TO SURRENDER. It was fabulous! It comes out next month. I'm not sure what I'm going to read next, but it will likely be Louisa Edwards's new book, TOO HOT TO TOUCH, which so happens to also be the title of my new book. We call ourselves Title Twins. :-) Her books are based on chefs...and I'm a serious foodie. I love her sexy contemporaries, even if they do make me hungry. I also want to read THE HUNGER GAMES. I feel like I'm the only person in the universe who hasn't read the book yet!♥ 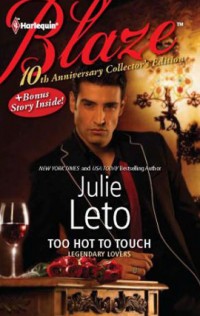 SUMMARY: In the sultry heat of New Orleans, a masked man stalks his next prey…private investigator Claire Lécuyer. In order to protect her, FBI agent Michael Murrieta—the descendant of a real masked legend—must go undercover at her hiding place…a sensual retreat, where decadence and sin beckon from every room. Once immersed in this world of pleasure, Claire and Michael find themselves teased by the languidly sexual environment—and their blazing attraction to each other. But even as they “mask” their true identities, it’s too late. Now Claire and Michael are caught up in the danger…and their desire. And the longer they stay in the sensuous world, the more dangerous it is!

PatriciaW said…
Hi Julie! The Legendary Lovers series sounds great. Looking forward to you republishing the "Dirty" series. I remember the website you had for those books but didn't get a chance to read them.
12:24 PM

JulieLeto said…
You won't have to wait much longer, Patricia! They're nearly ready to go. I probably need to think about relaunching that website again, too.
6:38 PM

mslizalou said…
I'm so excited we could get a 3rd book in the "Dirty" series! I've always wanted more!

Love how authors are able to branch out with digital publishing. Make me love my kindle even more. :)
7:56 PM

Sherie said…
Loved Alex and Lucy. Cannot wait to read the rest of the series!
10:02 PM

JulieLeto said…
Thanks, Liza! I was SO SHOCKED when I went into my old file and found a complete synopsis for the third book. I didn't even remember that I'd plotted it with so much detail. I hope it works out that I can write it...I'm even having the cover designed, just in case!
10:13 PM

JulieLeto said…
Sherie, thanks so much! If you liked Alex and Lucy...I think you'll really enjoy Michael and Claire. And Danny and Abby, too, of course! It was great fun to write this series and especially the end of book three, where all three couples are working together.
10:14 PM

Bella@BeguileThySorrow said…
Hi Julie :)
I'm so glad the "Dirty" series is gonna be available in ebook. I've been meaning to read it but been so busy lately and have so much crap Im carrying with me all the time that I depend on my nook for having my books convenient for me. Sounds spoiled, I know lol.
11:40 PM

JulieLeto said…
Bella, that doesn't sound spoiled to me at all! I'm the same way with my Kindle!

If you'd like to know when the books are available, go to my website and subscribe to my front page. You'll get a very short email alert whenever I post new information. I do NOT sell email addresses...in fact, I don't even know them. It's through a subscription service.
10:53 AM