REVIEW & BOOK DISCUSSION QUESTIONS: THE FARTHEST HOME IS IN AN EMPIRE OF FIRE: A Tejano Elegy 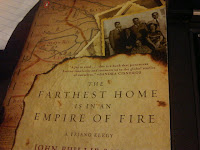 THE FARTHEST HOME
IS IN AN EMPIRE OF FIRE:
A Tejano Elegy
By John Phillip Santos
Penguin Book Memoir

“My Spanish ancestors were not homebodies. They were outliers from the start of our story en las Americas, nomads setting out from whatever their Spanish past was, willing to leave all they knew behind once and for all in search of a new way of life in an unimagined place. Perhaps they were confident that the past would remain where it had always been, if only abandoned, lost, swallowed up, like the enchanted continents of myth like Mu or Atlantis that live on in memory long after any map survives detailing their coastlines and whereabouts. Because of that long estrangement across generations and hundreds of years, there were no living memories of Spain in the Lopez-Vela families.” --- John Phillip Santos

This book is a “wildly inventive” combination of family memories, personal odysseys and magical realism. John Phillip Santos chronicles his journey to discover his mother’s family, who arrived in southern Texas in the 1620s. Conquerors were soon conquered, and little remained of the family’s history. Following his uncle’s wishes, Santos sets out to rediscover his family’s roots. It is a task he both abhors and delights in. Guiding him on his journey is Cenote Siete, aka C7, whom the reader is never sure if he is a ghost, guardian angel or Santo’s conscience. The book is easy to read but often times hard to follow, as the author concentrates more on the journey than the discovery.

1) Why was discovering his ancestors so important to the author?

2) Why do you think the Lopez and Vela families forgot their history, especially given that they were once landowners and important? These families landed with the Conquistadores, where granted lands by kings and yet the descents remember nothing; some don’t even care.

3) Who or what do you think is Cenote Siete?

4) Do you believe there is a “Zona Perfecta”? Is it limbo? Purgatory? A drug-induced trance?

5) Do you think we should know who are family was? Where they came from? Is it important? Is it worth remembering?

6) Can the past rule our lives? Can it help? Hinder?

7) Would you be interested in researching and tracing your family’s roots?

ABOUT THE AUTHOR: John Phillip Santos is a freelance filmmaker, producer, journalist, and author, and in 1979 became the first Mexican-American Rhodes Scholar. His first family memoir, PLACES LEFT UNFINISHED AT THE TIME OF CREATION, was a finalist for the National Book Award. He was awarded the Academy of American Poets' Prize at Notre Dame, the Oxford Prize for fiction,[ and the Berlin Prize Fellow at the American Academy in Berlin. He lives in San Antonio, Texas, and is University Distinguished Scholar in Mestizo Cultural Studies at the University of Texas San Antonio.


DO LEAVE A COMMENT.   Let us know what you think of the book, C7 and the Zona Perfecta.