June 25, 2012
THE LOST ANGEL won Best Novel in Adventure/Drama in both the English and the Spanish/Bilingual categories of the 2012 International Latino Book Awards.  The book is sort of like a cross between THE DI VINCI CODE and the movies of Indiana Jones -- Thrilling.  Heart-stopping. Memorable. 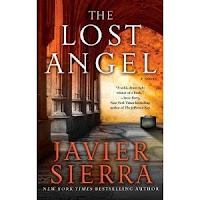 THE LOST ANGEL
by Javier Sierra
Atria Books, 2011
Book Summary:  In approximately seventy-two hours, a little-known Middle Eastern terrorist group plans to bring about the end of the world. Convinced that they are the descendants of angels and on the verge of at last returning to heaven, they kidnap scientist Martin Faber, whose research has uncovered an extraordinary secret. Martin’s only hope for survival is the rare psychic gift of his young wife. But Julia Alvarez must find the courage to save her husband while running from religious extremists and clandestine government agencies.
Javier Sierra takes readers on an exhilarating international adventure, from the summit of legendary Mount Ararat to the high desert of New Mexico, from the monuments of Washington, DC, to the medieval city of Santiago de Compostela in Spain. THE LOST ANGEL bears all the hallmarks of the beloved author’s erudite yet fast-paced brand of storytelling, combining historical fact and fiction with dazzling narrative surprises.
ABOUT THE AUTHOR:  Javier Sierra, is a journalist by trade.  He wrote his first non-fiction book in 1995 and his first novel in 1998.  THE SECRET SUPPER was Sierra’s first release in the U.S. and an instant sensation.  Sierra's books have been translated into 35 languages.  THE LOST ANGEL is the long-awaited follow-up to THE SECRET SUPPER, but it stands along as a book.  Sierra currently lives in Madrid.
To see the book trailer, click here.

John Ghost said…
Javier Sierra´s spanish-readers will enjoy this Spanish Author too: Gabri Ródenas and his NOAH´S BUNKER (EL BÚNKER DE NOÉ). He´s quite similar (and similar to Dan Brown too): http://tinyurl.com/dy4nyup
3:35 AM