We lost Piri Thomas recently. His book, DOWN THESE MEAN STREETS, opened the door to a world of gang violence not seen before. Unfortunately, too many of our young Latino men –nationwide!– are lost to gangs and drugs. But some survive and are able to get out of that land of darkness. One such success is Luis Rodriguez. He too has a gruesome tale to tell. Below is an excerpt from his memoir; Plus, links to his author page and video trailer. --LBC

"Vivid, raw . . . fierce, and fearless . . . Here’s truth no television set, burning night and day, could ever begin to offer." —The New York Times


“Cry, child, for those without tears have a grief which never ends.”—Mexican saying 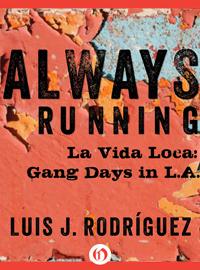 THIS MEMORY BEGINS WITH flight. A 1950s bondo-spackled Dodge surged through a driving rain, veering around the potholes and upturned tracks of the abandoned Red Line trains on Alameda. Mama was in the front seat. My father was at the wheel. My brother Rano and I sat on one end of the back seat; my sisters Pata and Cuca on the other. There was a space between the boys and girls to keep us apart.

“Amá, mira a Rano,” a voice said for the tenth time from the back of the car. “He’s hitting me again.”

We fought all the time. My brother, especially, had it in for La Pata—thinking of Frankenstein, he called her “Anastein.” Her real name was Ana, but most of the time we went by the animal names Dad gave us at birth. I am Grillo, which means cricket. Rano stands for “rana,” the frog. La Pata is the duck and Cuca is short for cucaracha: cockroach.

The car seats came apart in strands. I looked out at the passing cars which seemed like ghosts with headlights rushing past the streaks of water on the glass. I was nine years old. As the rain fell, my mother cursed in Spanish intermixed with pleas to saints and “la Santísima Madre de Dios.” She argued with my father. Dad didn’t curse or raise his voice. He just stated the way things were.

“I’ll never go back to Mexico,” he said. “I’d rather starve here. You want to stay with me, it has to be in Los Angeles. Otherwise, go.”

This incited my mother to greater fits.

We were on the way to the Union train station in downtown L.A. We had our few belongings stuffed into the trunk and underneath our feet. I gently held on to one of the comic books Mama bought to keep us entertained. I had on my Sunday best clothes with chewed gum stuck in a coat pocket. It could have been Easter, but it was a weeping November. I don’t remember for sure why we were leaving. I just knew it was a special day. There was no fear or concern on my part. We were always moving. I looked at the newness of the comic book and felt some exhilaration of its feel in my hand. Mama had never bought us comic books before. It had to be a special day.

For months we had been pushed from one house to another, just Mama and us children. Mom and Dad had split up prior to this. We stayed at the homes of women my mom called comadres, with streams of children of their own. Some nights we slept in a car or in the living rooms of people we didn’t know. There were no shelters for homeless families. My mother tried to get us settled somewhere but all indications pointed to our going back to the land of her birth, to her red earth, her Mexico.

The family consisted of my father Alfonso, my mom Maria Estela, my older brother, José René, and my younger sisters, Ana Virginia and Gloria Estela. I recall my father with his wavy hair and clean-shaven face, his correct, upright and stubborn demeanor, in contrast to my mother who was heavy-set with Native features and thick straight hair, often laughing heartily, her eyes narrowed to slits, and sometimes crying from a deep tomb-like place with a sound like swallowing mud.

As we got closer to the Union station, Los Angeles loomed low and large, a city of odd construction, a good place to get lost in. I, however, would learn to hide in imaginative worlds—in books; in TV shows, where I picked up much of my English; in solitary play with mangled army men and crumpled toy trucks. I was so withdrawn it must have looked scary.

This is what I know: When I was two years old, our family left Ciudad Juárez, Chihuahua, for Los Angeles. My father was an educated man, unusual for our border town, a hunger city filled to the hills with cardboard hovels of former peasants, Indians and dusk-faced children. In those days, an educated man had to be careful about certain things—questioning authority, for example. Although the principal of a local high school, my father failed to succumb to the local chieftains who were linked to the national party which ruled Mexico, as one famous Latin American writer would later say, with a “perfect dictatorship.”

When Dad first became principal, there were no funds due to the massive bureaucratic maze he had to get through to get them. The woman he lived with then was an artist who helped raise money for the school by staging exhibitions. My father used his own money to pay for supplies and at one point had the iron fence around the school torn down and sold for scrap.

One year, Dad received an offer for a six-month study program for foreign teachers in Bloomington, Indiana. He liked it so much, he renewed it three times. By then, my father had married his secretary, my mother, after the artist left him. They had their first child, José René.

By the time my father returned, his enemies had mapped out a means to remove him—being a high school principal is a powerful position in a place like Ciudad Juárez. My father faced a pile of criminal charges, including the alleged stealing of school funds. Police arrived at the small room in the vecindad where Mama and Dad lived and escorted him to the city jail.

For months my father fought the charges. While he was locked up, they fed him scraps of food in a rusted steel can. They denied him visitors—Mama had to climb a section of prison wall and pick up 2-year-old José René so he could see his father. Finally, after a lengthy trial, my father was found innocent—but he no longer had his position as principal.

Dad became determined to escape to the United States. My mother, on the other hand, never wanted to leave Mexico; she did it to be with Dad.

ALWAYS RUNNING was first published in 1993. It is being re-released by Open Road Media with a new introduction, which spares no detail in its vivid, brutally honest portrayal of street life and violence. It stands as a powerful and unforgettable testimonial of gang life, by one of the most acclaimed Chicano writers of his generation.

BOOK SUMMARY:  Luis Rodríguez joined his first gang at age eleven. As a teenager, he witnessed the rise of some of the most notorious cliques and sets in Southern California and immersed himself in a life of violence—one that revolved around drugs, gang wars, and police brutality. But unlike most of those around him, Rodríguez found a way out when art, writing, and political activism rescued him from the brink of self-destruction.

To watch a video of Luis J. Rodriguez talking about his life, click here.