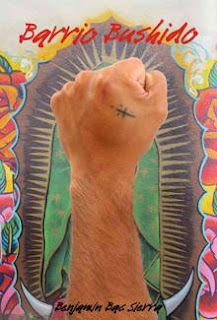 Bac Sierra’s debut is raw, harsh and hellishly disturbing. It’s gruesome and yet you can’t stop reading. It’s like a car accident that you have to slow down for and watch.

And watch we do as Bac Sierra’s three homeboys are caught in an endless circle of violence and despair. There may be no honor among thieves, but there is a code of loyalty among the homeboys. And where one leads the other two follow, no questions asked.

There’s El Lobo, the undisputed leader, whose thirst for violence leads to the homeboys eventual downfall. Then there’s El Toro, the enforcer. He left the hood for a stint in the Marines, and came back a proficient killing machine. Finally, there’s Santo, the good one. Maybe the conscious of the group, but he too is powerless to stop Lobo’s machinations.

This book was a nightmare that I could not put down until the very last page. Plenty of others must have thought so too because BARRIO BUSHIDO is a finalist in the 2012 International Latino Book Awards. Winners will be announced on June 5. I wonder how the homeboys will do.###

ABOUT THE AUTHOR: The son of Guatemalan immigrants, Benjamin Bac Sierra was born and raised in San Francisco’s Mission District, then the heart of Latino culture in Northern California. Living the brutal “homeboy” lifestyle, at 17 he joined the U.S. Marine Corps and participated in front line combat during the first Gulf War. After his honorable discharge, he completed his Bachelor’s degree, a Masters in Creative Writing, and a Juris Doctor degree. Currently, Bac Sierra is a professor at City College of San Francisco.