BOOK OF THE MONTH: THE LOST by Caridad Piñeiro

MEET CARIDAD!   New York City.  Join us on Tuesday, August 21, at the Barnes & Noble Bookstore in the Citicorp Building at 6:30pm, 2nd floor, Learning Center (through Music section).  We are going to talk Sin Hunters, books, writing and mojitos! 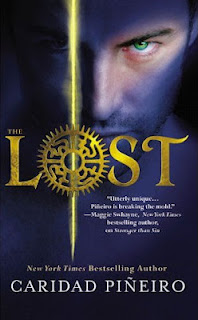 I am happy to announce August’s Book of the Month, THE LOST, by my friend and author, Caridad Piñeiro. She is an inspiring dynamo: a lawyer by day, a writer by night, weekend and whenever she can fit her writing time in.

THE LOST is the first book in Caridad’s new Sin Hunters series. It was a 2012 RITA finalist – RITAs are the Oscars of the romance industry. And, introduces a whole new world to her large audience – the Jersey Shore. LOL. The Sin Hunters series is set along the Jersey Shore, and introduces an exciting new race of people – The Light and Shadow Hunters.


BOOK SUMMARY:  Adam Bruno is no ordinary millionaire. The heir to an ancient race possessing a dark, powerful magic, he can shapeshift and create energy. His gifts make him a living weapon and have forced him to live in seclusion. But now an inhuman force hunts down Adam-just when he finds someone who makes him feel more human than he ever imagined possible . . .

Home from combat in Iraq, Bobbie Carerra wants only peace, yet soon joins Adam in a terrifying battle against paranormal enemies who hide in plain sight. She’s drawn to his strength of mind and body; he’s attracted to her courage and intoxicating energy. Their scorching passion can either transport them to the heights of ecstasy or-if Adam’s powers rage out of control-destroy them. But when an invisible brotherhood tightens its nets and someone Adam trusts betrays him, only a heartrending decision can save them.


To read an excerpt of THE LOST, click here.

To watch the video trailer for THE LOST, click here.

To read an excerpt from THE CLAIMED, book 2 of the Sin Hunters series, click here.
(This book is available now in stores and online.)

To learn more about this talent author, please visit Caridad Piñeiro at http://www.caridad.com/.

And, as always, Read Latino.♥

Caridad Pineiro said…
Thank you so much for choosing my book for your book club! I am so honored. If you are in the NYC area on August 21, join me at Las Comadres, Compadres & Friends Book Club meeting, 6:30pm, Barnes & Noble, 51st & Lexington.
1:12 PM

Diana Diaz said…
I will be around, and would love to meet my fellow Latina author.
7:16 PM