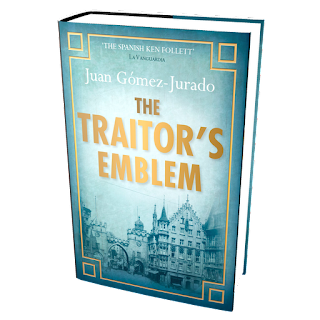 Gómez-Jurado tells a riveting, redeeming love story... and a villain so evil he makes Hitler look like a pretty nice fellow" --KIRKUS REVIEWS
Our Spanish friend, Juan Gómez-Jurado, continues his winning streak with his third bestseller in a row.  THE TRAITOR'S EMBLEM is the story of a daring rescue at sea, a Spanish captain, four German survivors, a desperate request, a mysterious emblem, a harsh betrayal and the quest of a lifetime.  This story is about fathers and sons, heroes and villians, love and hate, loyalty and death. A must for every Gomez-Jurado fan worldwide.


From the press release:

In the vein of Dumas' and Zafon's masterpieces, Juan Gómez-Jurado's THE TRAITOR'S EMBLEM is an epic novel about decades of family betrayal, impossible love and the high price of vengeance. Set against the dark and menacing streets of Depression-era Munich and the cruel rise of Nazism, Gómez-Jurado's spellbinding thriller proves again that he is a master of narration.

SUMMARY: The Straits of Gibraltar, 1940. In the heart of a storm at sea, Captain Gonzalez rescues a group of German castaways. When the torrent subsides, the leader of the survivors gratefully offers the captain a strange-looking emblem made of gold and diamonds, in exchange for safe passage to the coast of Portugal. Decades later, in 2002, the son of captain Gonzalez receives a substantial offer for the emblem. He does not sell it, but the buyer reveals an astounding story behind that mysterious object: it holds the key to Paul Reiner’s lifelong quest....

Munich, 1919. After his family fall into disgrace, 15-year-old Paul Reiner and his mother work as servants in the palace of Baron Von Schroeder. Unhappy and full of despair, Paul dreams of the heroic father he never knew. But one night, seconds before committing suicide, Paul's cousin reveals a terrible secret. Paul's father didn't die in the First World War, as he had always been told. He was killed by someone very close to him, and for unclear reasons. This discovery turns Paul's world upside down and from that moment, Paul sacrifices everything to discover the truth behind his father's death, even his love for Alys Tannenbaum, a Jewish photographer who helps him on his dangerous pursuit. Together they fight for their love, the truth behind Paul's family and the vengeance of Paul's half brother who rises to become a high-ranking Nazi and on Hitler's orders and successfully infiltrates the Mason organization to root out their Jewish members.###

Click here to read an excerpt from THE TRAITOR'S EMBLEM.

Click here to view the trailer for the book.

ABOUT THE AUTHOR:  Juan Gómez-Jurado is an award winning journalist and bestselling author. He is one considered by the critics as an "impossibly young master of thriller", his writing has been widely described as "energetic and cinematographic". In 2010, Juan celebrated the mark of 3 million readers worldwide. His books include GOD’S SPY and THE MOSES EXPEDITION. His latest novel, THE TRAITOR’S EMBLEM, was translated into 40 languages. Juan lives in Spain with his wife and two kids. Visit him at www.juangomezjurado.com.