REVIEW: UPTOWN MENANCE: TO HELL AND BACK by Carmen Noboa Espinal

"Life is all about loving yourself. It's all about knowing when to follow and know when
to get on your own path, even if it means looking soft or being called a chump." – Jenny Rivera 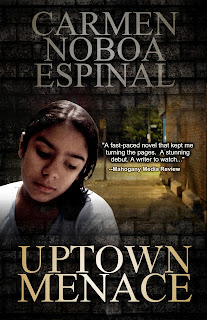 UPTOWN MENANCE was first published in 2000 and its message is as powerful today as it was twelve years ago when it debut. It is the chilling and harsh story of a young Latina born into New York's most violent housing project. It's a story about drugs and violence, family and friends, betrayal and death, but most of all this is a story of survival and perseverance. Our heroine is vulnerable yet tough as nails. Like all good Latinas, she cares for her family and is loyal to her friends, and no police, nosy social workers, crazy Santeras or gun-packing drug dealers can change that.

Noboa Espinal has given our heroine a strong voice. Readers will be entranced as Jenny tells her story from its explosive beginning to its hopeful end. She reveals herself to us, warts and all, and dares us to listen, to see, to learn. Jenny earns our respect and our admiration for her loyalty and her determination.


SUMMARY: Our story opens with Jenny and her boyfriend Vincent -- members of rival drug cartels -- escaping for a romantic getaway weekend. All is well until Vincent shoots her in retaliation for a hit on his boss. As she lies bleeding on the tile floor, Jenny's life flashes before her eyes, maybe for the last time.

With a mother who is an addict and her father MIA, Jenny becomes a mother to her two brothers and sister when she is still desperate for a mother herself. Too soon Jenny is defending herself and her sister from the men her mother brings home. She hooks up with two boys from the neighborhood who watch her back. Jay is the mastermind, Danny is the muscle and Jenny is the backup. Their petty thefts lead to selling drugs to dealing with murderers, where any mistake could cost them their lives. Jenny is all about saving her family and hanging with her boys, until she falls in love.

Vincent is charming, loving and her first lover. Unfortunately, he belongs to the rival drug cartel. But the heart wants what the heart wants, and Jenny refuses to dump him. She's convinced that she can keep her "work life" separate from her love life. But she is only fooling herself, especially when confronted by Vincent's wife. Jenny's whole life suddenly unravels: her mother dies, her brother is thrown into jail, Jay is murdered and Danny is shot and imprisoned. Though her father returns after her mother's funeral and tries to make a home with them, his new wife and daughters, Jenny refuses to change her ways. Rage and revenge consume her whole life until one night Jenny makes a fateful decision that will change her life forever. She tries to lay low until Vincent calls and invites her for a romantic getaway, where he shoots her. It's a miracle that Jenny survives, but she does. And though at the end she gets a chance to get out, she deliberately stays in the projects because they are her world. She has conquered them, and she is ready to build a new life, a new future, with a new purpose right where it all began.###

ABOUT THE AUTHOR:  Carmen Noboa Espinal is a Dominican author born and raised in the Upper West Side of New York City. She is currently the owner of Paper Trail Publications, a publishing company geared towards publishing the works of Latina/o authors. She has lectured in schools and libraries throughout the city and has co-authored a musical screenplay entitled, Angels Song. She has also edited the works of various popular authors. Carmen lives in New York City with her family and is working on her second novel and a series of cultural children’s storybooks. She can be reached at: http://facebook.com/cnoboaespinal.