NOTE:   Saturday, October 13:  Meet Sandra at the Latino Book and Family Festival at the California State University/Dominguez Hills in Los Angeles.  She will be moderating the Historical Fiction/Nonfiction panel, and will be on a panel on What Latinas Want to Read. Admission is free.
"This story of love, mysticism and betrayal tests the ultimate boundaries of sisterhood.
I loved this brave, lushly written tale of life in old Santa Fe."
---Jill Smolinski, author of Objects of My Affection and The Next Thing on My List

Survival themes are one of my interests, especially if the protagonist is female: woman vs. nature, woman vs. the establishment (tradition), woman vs. woman, and woman vs. herself.  I also like settings wherein the protagonist is challenged to be creative, flexible, to change coping strategies.  Perhaps this is because a single mother who experienced all these conflicts raised me.

When I tell people I’m from Santa Fe, their eyes light up; they’ve either visited the Land of Enchantment, or it’s on their bucket list.  The city is steeped in history, but I’m not aware of much fiction written about the New Mexican women of the 19th century.  There are references to the “first white woman” in Santa Fe, and most of the other period pieces (nonfiction written by men) barely mention women, or are unflattering when they do.  My goal was to tell a story about women who interested me, women who bravely dealt with whatever life dished out to them.  The issues confronted by the Sandoval sisters are contemporary: racism, sexual intolerance, the power of superstition, dealing with mother-in-laws.

The story also has a fair bit of romantic eroticism which the centuries-old Sandoval diaries dealt with candidly. My research didn’t yield much information on rebellious Latinas of yore.  They obeyed their fathers, brothers, husbands, and priests, so I wrote the Sandoval sisters–not exactly as firebrands–but as women who make a change toward owning their power, each in their own way, and all while living on a rough frontier at the juncture of three cultures.

Initially, my research was to gain a better understanding of my New Mexican ancestry (Sandoval and Gallegos), but also to find the root of Northern New Mexican identity. I wanted to know why they insisted on calling themselves Spanish, and why they seemed to resent Texans, in particular.

Merchants have always loved the Santa Fe trail.  The Mexican-American War was fought to gain more land, but it was also about controlling trade, and that meant controlling Santa Fe:  it was the first foreign capital captured by the U.S. An unbelievable influx of Anglo men occurred, but nary a word has been written about how that affected the New Mexican women.  Until now.


SYNOPSIS:   When Alma flees with her young lover to Texas to escape an arranged marriage with a much older man, she sets in motion a drama that will put the sisters and their legacy at risk.  Pilar, a 14-year-old tomboy, is offered as a replacement bride, and what follows is a sensuous courtship and marriage clouded by the curses of her husband’s former lover, Consuelo. She will stop at nothing, even the use of black magic, in her effort to destroy the Sandoval family.  The Mexican-American war begins and the Americans invade Santa Fe.  The sisters survive the hostilities from two important fronts-New Mexico and Texas.  Their money and ancient knowledge offer some protection, but their lives are changed forever.###


To read an excerpt of the book, visit Sandra Ramos O'Briant at her Facebook author page by clicking here. 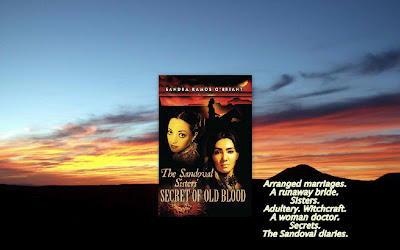 ABOUT THE AUTHOR:  Sandra Ramos O’Briant grew up in Santa Fe and spent summers in Texas. Her short stories and creative nonfiction have appeared in numerous journals and anthologies, including Café Irreal, Flashquake, riverbabble, LiteraryMama, Whistling Shade, La Herencia, latinola.com, Label Me Latina/o and The Copperfield Review. In addition, her short stories have been anthologized in Best Lesbian Love Stories of 2004, What Wildness is This: Women Write About the Southwest (University of Texas Press, Spring 2007), Latinos in Lotus Land: An Anthology of Contemporary Southern California Literature, (Bilingual Press, 2008), Hit List: The Best of Latino Mystery (Arte Publico (2009), and The Mom Egg (Half Shell Press, 2010). To learn more about Sandra and the Sandoval Sisters, visit www.thesandovalsisters.com.