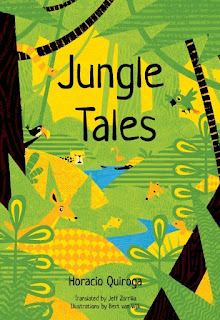 JUNGLE TALES (CUENTOS DE LA SELVA) is a collection of eight short stories by Horacio Quiroga that was published to enormous success in 1918. To this day, children in elementary schools across all Latin America read this book as a part of their curriculum. Quiroga captures the magic of the jungle, which is the scene of great and exciting adventures illuminated by nature in all its splendor. A place where snakes throw glamorous parties with flamingoes, stingrays join forces to fight off man-eating jaguars, and a giant tortoise carries a wounded man on its shell for hundreds of kilometers to bring him to safety.

American English teacher, Jeff Zorrilla, and Argentine film critic, Natalia Cortesi have just published their fully illustrated English translation of the popular Latin American children’s book CUENTOS DE LA SELVA by Uruguayan writer Horacio Quiroga. With this book they bring all the fantasy and wonder of the jungles of South America to English readers around the world.

While these stories have been translated to over 10 languages, Jeff Zorrilla and Natalia Cortesi were astonished to find out that there is no English translation available. Zorrilla explains:

Natalia introduced me to this great book. We would read these stories to each other with immense pleasure before going to sleep. One day while she was reading me The Bald Parrot from with her affected voice imitating that of the antagonistic jaguar, I realized that these were a collection of stories that English speaking children deserve the pleasure of reading.”

Dutch artist Bert Van Wijk has done all the beautiful, full-color illustrations of the book.

Zorrilla and Cortesi have opened up an online shop at Etsy.com for JUNGLE TALES:  http://www.etsy.com/shop/JungleTales.

BOOKSIGNING -- December 21:  Zorrilla and Cortesi will be having a booksigning at 6 P.M on at La Casa Azul Bookstore in New York at143 E. 103rd Street, (between Lexington & Park Ave, steps away from the 6 train - 103rd street stop).