REVIEW: PIG BEHIND THE BEAR by Maria Nieto


Remember that all through history the way of truth and love has always won.
There have been tyrants and murderers and for a time they seem invincible
but in the end, they always fall – think of it, ALWAYS.
--Mahatma Gandhi

Me, La Chicana, with a birth certificate that had the box for race checked white. I had lived by a rule that labels were just that, labels. I had convinced myself I was more than a label and I didn’t have to fit into one mold, or tout one line of thought. Even so, I admired those who believed so much that their power, be it brown or black with fists held high, could make a change. But I could never muster the passion to convert convictions into action. Partly, becomes some of my people had been screwing over their own for years. I wanted to live a different story.
--Alejandra Marisol 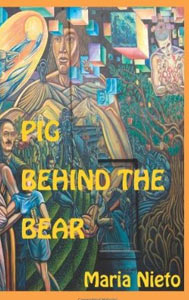 Nieto makes a sparkling debut with PIG BEHIND THE BEAR. It’s a fast-paced mystery about a cub reporter who gets in over her head quickly and stays afloat through sheer ingenuity and luck. The secondary cast of characters is strange, crazy and add to the fun and mayhem. There are lots of twists and turns in this story, an epiphany that has to be read to be believed, and car chases galore. YA readers will also enjoy this book. I hope we see more from this talented author.

BOOK SUMMARY: It’s 1971, the one-year anniversary of the killing of famed LA Times reporter, Ruben Salazar. Alejandra Marisol, a junior reporter, is asked to write a commemorative piece for the paper. Excited at her first solo assignment, Alejandra sets out on her ’65 VW Beetle, Azulita, to interview Salazar’s old friends and visit the place where he died. But what should have turned out to be a routine interview for a “puff” piece turns into a wild, dangerous run for her life. Alejandra stumbles upon ritualistic murders, corrupt cops and a child pornography ring. She escapes two goons by hiding in a church, where she has a close encounter with a singing Jesus and a motherly Mary, who gives her a magic lipstick that empowers our young heroine. Then with a crazy, wacky crew of misfits – and lots of luck! – Alejandra saves the day and brings the bad guys to justice.###

Author bio: Maria Nieto grew up in the Highland Park neighborhood of Los Angeles and moved from the area in 1984 to attend a Ph.D. graduate program in Immunology at UC Berkeley. Maria currently resides in Oakland, and is a Professor of Biology at California State University, East Bay, where she has been engaged in underrepresented-minority student recruitment, teaching, and research for over 23 years. As a researcher and educator, Maria’s writings have taken the form of scientific journal publications, and more recently popular press articles. PIG BEHIND THE BEAR is her first work of fiction.