REVIEW: FROM MACHETE FIGHTS TO PARADISE by Daniel DiMarzio


The air was charged with electricity as the crowd held their breath in suspense.  Both men took their left hands, which were wrapped in their shirts, and put them behind their backs.  They then held their machetes out in their right hands and approached one another.  It looked like an ancient duel...and it was.  It was a real life duel with swords.  No rules. Real swords. May the best man win.
--FROM MACHETE FIGHTS TO PARADISE 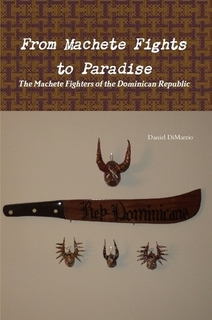 Daniel DiMarzio's book about the machete fighters in the Dominican Republic intrigued me from the first, because it was ...real.  These fighters and these "duels" are happening today, in our lifetime, on a tropical paradise, and they are to the death!

"When I first heard of sword fights in the Dominican Republic," writes Daniel, "I was very skeptical. I thought maybe I was hearing about a freak occurrence or a story that was blown out of proportion. But, then I heard another story…and another. All of them about machete fights. Not just one person with a machete attacking some unarmed person either, these were stories of two people wielding machetes. Two people dueling with real, live swords. Then, I actually went there and met people who had been in machete fights and had the scars to prove it."

Having lived in Japan and being a student of martial arts, Daniel has always been fascinated with ancient sword fights.  He laments that today's sword fights are more of a choreographed ballet, as opposed to the real down and dirty, fight to the death of old Samurai.  But times have changed and the old sword dues are no more.  Well, at least not in Japan.

It turns out that in the tropical island of the Dominican Republic, men are still fighting with swords, and are still fighting in real life and death situations.  This is sword fighting in its purest form, according to Daniel.  The examples and tales he shares are horrific and bloody, but fascinating in a macabre sort of way. And for more gruesome fare, do visit his website for live videos of machete fighting. (They are not for the weak of heart or weak of stomach!)

Like Daniel states in his book, there is nothing romantic about these "machete fighters."  They are not a club, they don't do demonstrations, they don't have competitions.  These are real-life fights over honor, over money, over women.  The reward is survival and the "scars to prove it."

Visit Daniel at www.danieldimarzio.com to learn more about the machete fighters and the Japanese Samurai.###


Daniel DiMarzio was born on the Army Base in Fort Campbell, Kentucky in 1982. He graduated from Peirce College in 2006 with a Bachelor of Science in Business Administration, Concentration in Management and is a member of Delta Mu Delta, International Honor Society in Business Administration. He is also a graduate of the Pennsylvania School of Muscle Therapy.  Daniel lived in Japan for two years where he owned and operated a business in the Kanto region. While living in Japan he continued his study of the martial arts. He has also spent time in the Dominican Republic, studying the use of the machete (and knives) there.  Daniel is also the owner of the Winds of Japan Shop, and author of A Story of Life, Fate, and Finding the Lost Art of Koka Ninjutsu in Japan; Finding the Real Japan, Stories from the Land of the Rising Sun; and From Machete Fights to Paradise, The Machete Fighters of the Dominican Republic.


DISCLAIMER:   Book provided by the author.  A good review was not guaranteed.

Unknown said…
This information is really nice. This type of post is attracting people to read. Thank you for sharing. . .
storage services in mumbai.
1:38 AM