The Latina Book Club congratulates our friend Aurora Anaya-Cerda, founder and owner of La Casa Azul Bookstore, whom the White House today recognized as a Crowdfunding “Champion of Change.” This is an honor well deserved! 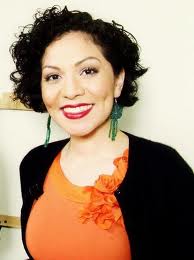 “The Champions of Change that the White House is honoring today are using crowdfunding to create jobs for our Nation’s veterans, accelerate the deployment of solar energy, revitalize our cities, and expand the frontiers of citizen science,” said Thomas Kalil, Deputy Director for Technology and Innovation for the White House Office of Science and Technology Policy. “Crowdfunding is the 21st century equivalent of barn-raising. We can use it to help our neighbors and fellow citizens start a business, enrich our culture, and apply grassroots creativity and imagination to challenges big and small.”

Aurora is the founder of La Casa Azul Bookstore, East Harlem’s only independent bookstore and the only bookstore in New York that features art and writing by Latino writers. Established in 2012 and funded in-part by a crowdfunding campaign on Indiegogo, La Casa Azul Bookstore has become a cultural hub in the city, providing programs, classes and readings, from local artists to nationally recognized writers and performers.

She is also the founder of the East Harlem Children’s Book Festival—an event that connects authors, publishers, families and the community as a whole. Aurora has worked as a dynamic and passionate supporter of cultural events in the East Harlem community and has been awarded the Juanita Centeno Leadership Award, the UCLA Women for Change Leadership Award, and the Casa Atabex Ache Women Warrior Award.

Aurora is a scholarship recipient of the New Start Fund, awarded to women entrepreneurs in New York City, and is a member of the Young Hispanic Leaders Program and the National Young Latino Leaders in the Arts Task Force. Plus, she is also a member of Las Comadres Para Las Americas.

Unknown said…
Nice post. It’s really informative for the followers and users of this site like me. I like the way you describe this. Thanks for sharing. . .
household moving services Bangalore.
12:59 AM