The Latina Book Club's mission is to promote Latina / Latino authors, which we do through book reviews, author interviews, publicity announcements, book of the month selections, etc. A new feature we are adding is "Writers Wednesdays." The first Wednesday of each month we will feature a writer talking about .....writing. Happy Reading!

MY PROCESS
by Jonathan Marcantoni 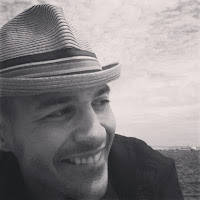 I have always felt intimidated when sitting in a writing class or even just a group of writers and they begin to talk about process. What I hear time and again from these writers, sometimes more seasoned than me, sometimes less so, is the amount of discipline they have. I hear stories of people waking up the same hour every day and getting two hours of writing done before the kids wake up, or they stay up late at night, or they write throughout the day on notepads or sticky pads. They always have a pen and paper handy in case inspiration hits them. I listen to all of this and feel quite nervous, and then utterly ashamed when the entire group (save for myself) cries out in unison that a writer must write every day and be that disciplined in order to be a true writer.

It should be said that many of the people I have heard this drivel from have never had a book published, or are self-published, or come from wealth or are retired and can therefore spend all their time writing. As for myself, I don’t have that discipline. I sometimes don’t write for days, or weeks. I rarely take notes, and if I do I forget about where I put them. What I do, however, is carry around mental notes. I play out the entire book in my head like a movie, repeatedly and for months at a time, mentally ironing out the rough narrative spots and figuring out what I can leave to deal with for when I actually write it. Writing for me is largely improvised. I obsessively think about it but when I actually sit down I let the muse take me where it wants to go. I always have an end result finalized, and as long as I’m heading mostly in that direction I don’t get in my own way. I want the writing to come from the emotion of the moment in which I write it. Even a sequence I have been dying to get to, one I have detailed to the letter, when I am actually writing it, can be entirely altered. I feel I must listen to my instincts over my planning. In spite of the writers groups who say otherwise, my lack of physical discipline doesn’t lessen my ability as a writer. I’d actually say that a person who micro-manages their story hurts the creative process. If you aren’t willing to be flexible, then how can the story breathe? How can the characters fully develop and surprise you. The best part of writing for me is being surprised, to go places I’d never have considered, even uncomfortable places. Correction, especially uncomfortable places.

And then there are those times when I hit a snag, when something I have been contemplating doesn’t quite work, so I write until I get to that point, and then try to figure it out. With my latest book, I was in luck because it is based on an academic study on human trafficking in Puerto Rico, so I went back to that text and found what I needed to move the story forward. The passages that came from that bit of additional research led to a subplot that I had to create on the spot, and it is one of my favorite sequences in the book.

I come from the theatre, so maybe that is why improvisation appeals so much to me. I have never agreed with the strict approaches to writing taught in classrooms or at seminars. At least not for me. I need that anarchy in my writing, that somewhat controlled chaos that is what feeds my creativity. I don’t think it makes me less of a writer, I really think anyone who says a real writer must be A, B, or C isn’t a real writer themselves and they are just trying to make themselves feel better about their own mediocrity.

That is not to say discipline is over-rated. I respect people with high levels of discipline in whatever they do, but discipline comes in many forms. I think the kind of discipline I have aspired to is one of perseverance. Writing is a cruel profession full of rejection and dead ends. You can write all the notes on all the pads in the world and write a thousand words a day and yet if you aren’t willing to put it out there to be critiqued and to be read, then you are lacking the most essential discipline there is, the discipline to fight for your vision against all odds. Because art doesn’t exist in a dark corner, it is a public act, and so after I do my little improvisational storytelling, the first thing I do is share it with someone. Because I want to mold it, and improve it, and show it off once it is in pristine condition.

That perseverance through all the stages of the artistic process is the most satisfying to me, and I hope all of you reading this has the pleasure to know that feeling one day.###


Jonathan Marcantoni is the author of three books, COMMUNION (with Jean Blasiar), TRAVELER'S REST, and THE FEAST OF SAN SEBASTIAN. He is co-owner and managing editor in chief for Aignos Publishing, an independent, royalty-based publisher of experimental and innovative fiction and nonfiction. He currently resides in San Antonio, TX with his wife, kids and dog.

Chris said…
This comment has been removed by the author.
8:18 AM

Chris said…
Well-put, Jonathan! The feeling I get from discussing this with many writers is that a number of us DON'T want to approach the uncomfortable, the unknown, etc. but this is exactly what makes good writing GOOD writing ... And without any sense of discovery in the writer, there is none for the reader. I think this is also why many writers avoid dialogue, too. Surprises emerge organically when you give your characters a voice ... Great piece!
8:23 AM

Unknown said…
I really appreciate it; I will visit whenever I have found the stuff that I have been searching for in the entire web for, keep up the great work! Thanks for sharing. . .
quality packing and moving in vizag.
12:52 AM