REVIEW: BIRD OF PARADISE: HOW I BECAME A LATINA, A MEMOIR by Raquel Cepeda

Race is in the eye of the beholder.—Raquel Cepeda

It’s exhilarating to be alive in a time of awakening consciousness,
it can also be confusing, disorienting, and painful.—Adrienne Rich 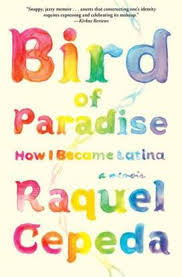 Raw and honest, brilliant and brutal. BIRD OF PARADISE is one woman’s daring journey to self discovery and family peace. The book is broken into two parts. The first part is the story of Raquel’s birth and upbringing by an abusive father and an indifferent stepmother. The abuse is excessive and cruel so readers beware. The second part of the book is heavy on DNA codes, but it is also full of new discoveries, new relatives, new connections. Part two is Raquel’s quest, her time traveling back in time through the DNA testing, to find the ancestral roots of her Latinidad.


BOOK SUMMARY: Raquel’s obsession over her racial ambiguity begins at a young age. Abandoned by her birth mother, she comes to belief that there is a fukku (a curse) on the women of her family who could never have a good relationship with their daughters. Raquel is raised by an abusive father, who insists on forcing his caramel-colored daughter with curly hair to play tennis and dress appropriately. Raquel grows up unwanted by the white kids who don’t want an imposter in their midst, and the Latino kids who consider her a fake. Raquel is able to nurture her Latin spirit through the help of a boyfriend’s mom, Maria, who acts like a second mother to her. Maria teaches her about Spirit Guides and mysticism. Rachel learns to trust the voice inside of her, a voice of an Africana who seemed to always be looking out for her. She had escaped many a dangerous close call when she listened to the African goddess within. Now, as an adult, Raquel decides to undergo DNA testing to find her ancestral origins. The testing is like time traveling to find her roots. The results are revealing and unexpected, and bring about a sort of peace with her father. Turns out that Raquel is white (European) and African and Taina Indian. She’s a melting pot of cultures, like most Latinos. But knowing her roots only enhances who Raquel is, and confirms what she knew intrinsically – she is a Dominican-American and the creator of her own destiny. 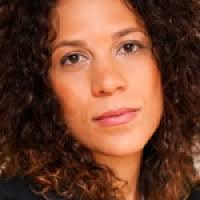 ABOUT THE AUTHOR:   Raquel Cepeda describes herself as a journalist, filmmaker, mother, time traveler and internationalist. A cultural activist, she focuses her work on issues affecting communities of color around the world. She produced and directed BLING: A PLANET ROCK, the critically acclaimed film about American hip-hop culture’s obsession with diamonds. To learn more about this fascinating woman, visit her at http://djalirancher.com/.

Unknown said…
Nice post. It’s really informative for the followers and users of this site like me. I like the way you describe this. Thanks for sharing. . .
international movers in pune.
2:11 AM