BOOK OF THE MONTH: THE TRAGEDY OF FIDEL CASTRO by João Cerqueira

Nowadays nobody is interested in miracles. They prefer to play the lottery, visit casinos or rob banks. – God
I’m tempted to believe that the history of mankind would have followed the same path if I had come to earth or not.  – Christ
In these times in which our people doubt their own abilities and at times seem to want to give up, it is vital that the person governing them shows with his own example that we can make it. –John F. Kennedy
History will absolve me. –Fidel Castro 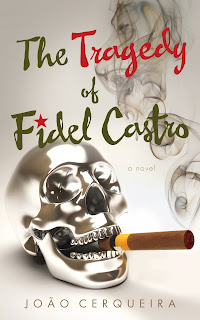 THE TRAGEDY OF FIDEL CASTRO is satire at its finest.  It’s thought-provoking, sardonic, ridiculous, engaging, outragerous and hysterical.

This book is a humorous twist on the Cuban missile crisis of the 1960s.  Cerqueira has created an alternate universe where no one is who they seem, except Fidel.  And, yet all the characters are the same.   The irony.
Book Summary:   A war is certain between Fidel and JFK.  Fatima puts in a frantic call to God.  He doesn't want to get involved as they are all his sons, so he'll send his first born -- again.  But, Christ resists the second coming.  He finally relents as the two armies face each other.  Fatima is hoping for a miracle, but she's old school.  J.E. Hoover hopes to make a deal with Fidel, but he goes from queen to pawn in one night.  JFK turns out to be a pompous knight in shining armor.  And, Fidel is restless and plagued by nightmares, and sees betrayal in everyone.
JFK and Castro agree to a face-to-face, mano-a-mano duel.   Fidel tries to ensure a victory by making a pact with the Devil, but the latter offers no guarantees.  Where Fidel seems himself dying on the battlefield and becoming an honored martyr, he soon finds himself prostrate on the battlefield at the mercy of his enemy, who takes away his most famous asset.
Cerqueira shows no respect for religion, politics, history or mankind.  You come to like that about him.  I have to read this book again because I am sure that I didn’t catch all of its nuances the first time.  This is a great read and a great author to watch!
ABOUT THE AUTHOR:   João Cerqueira hold a PhD in art history from the University of Oporto.  He writers fiction and non-fiction, including BLAME IT ON TOO MUCH FREEDOM, DEVIL’S OBSERVATIONS, ART AND LITERATURE IN THE SPANISH CIVIL WAR and MARIA PIA: QUEEN AND WOMAN.   Excerpts of his books have appeared in numerous periodicals, including The Liberator Magazine and Danse Macabre.  To learn more about this author visit him at www.joaocerqueira.com.

dovalpage said…
I have to read that book!! Sounds super interesting and funny!
3:50 PM

Adrian said…
Definitely something different. I can't say this is my genre, but I respect those that venture out far like this! What is the official review from the LBC on this? I'm curious :)
2:14 AM

Unknown said…
Hi,
I am glad to visit your blog. I am happy to find your distinguished way of writing the post. Thanks for posting. . .

shipping services in delhi.
1:59 AM