The Latina Book Club is pleased to introduce the talented Liz DeJesus.  Born in Puerto Rico, Liz is a novelist and a poet, and has been writing since she was able to hold a pen.  She has published several novels, and has just started a new exciting fantasy series.  Please join me in welcoming her. 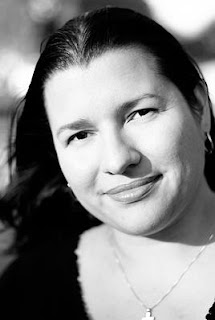 Q:  Your writing is an “intriguing blend of fiction and fantasy” so I have to ask – Do you believe in magic?  If so, how do you know it’s real? How long have you believed?

A:  I do believe in magic. But not the kind that’s described in my books. I don’t think people can control wind and fire or anything like that. I am a very spiritual person and I do believe that there is a very thin veil that divides the real world and the spirit world. I think that if you pay close attention you can see a lot of things, both good and bad. I have believed this my whole entire life. How do I know it’s real? Faith. Simple as that.


Q: You wrote in journals as a young girl.  Do you think that has helped you in your writing process? Do you think people, especially writers, should keep a journal?

A:  I think writing in a journal has been instrumental in my writing. It’s definitely a tool that I use on a regular basis. I write down all of my observations and random thoughts. I love my blog. It helps me connect with other writers and readers. It helps me share the random things that happen to me on a daily basis. It’s also a great sounding board when I have ideas that I’m not sure make any sense. I think everyone should keep a journal, especially writers.


Q:  You are a stay-at-home-mom with two small boys so you steal time whenever and wherever you can find it.  How do you know when you have a book? What tips can you give other writers when time is so limited?

A:  I know I have a book that’s ready to come out when I’m driving down the road and a scene pops into my head. I know I have an amazing character when I hear her chattering in the background as I’m washing dishes or taking a shower. So what do you do when you have limited amounts of time and small children on top of that? Ask for help. I ask for help all the time. I’ll steal bits of time here and there when I’m dropping off my son at preschool or picking him up after school. Those 10-15 minutes of quiet time in the car might not seem like much but if you add it up throughout the day that’s 20-30 minutes just sitting in the car. I always bring my pen and notebook with me everywhere I go. You just never know when an idea is going to strike.

I take advantage of nap time. I’ll have my husband take over for an hour so I can transfer all my notes into my computer. I’ll ask my mom, mother in law, or cousin to babysit just so I can go to the café and write for a bit. I’m lucky that my kids are mild tempered so I can get some work done in the living room while they’re playing peacefully or watching Cars for the millionth time. You just have to make the best of what you have.

Q:   You have a new series out, the Frost Series.  Tell us about The Frost family.  Who are they? How did they become the guardians of such magic items as Cinderella’s slipper and Snow White’s poisoned apple?

A:   The Frost family is made up of Rose, David and Bianca Frost. Rose and David are Bianca's parents and they run the Museum of Magical and Rare Artifacts. The museum was started by a relative during the Great Depression. He had some of Snow White’s most precious items, the poisoned apple, the poisoned comb, some ribbons and the magic mirror. He needed some extra money so he closed off part of his house and started the museum and charged people a penny to go in. The he started hearing rumors of other magical items popping up in Europe and he purchased some of them. And throughout the years the responsibility of the museum and the magical items was passed down generation to generation to the important women in the family. Rose is the current owner of the museum and she hopes that one day Bianca will take over for her. But, Bianca has other plans.


Q:  What other books should we expect in this series?

A:  I’m currently working on book #3 in the series, tentatively titled Shattered Frost. I’m hoping that this will be an ongoing series.


Q:  Who are your favorite authors and how have they influenced you?

A:   Definitely Julianna Baggott and Terry Moore. I think my greatest influence has been Terry Moore. He’s an artist/writer/creator of my favorite graphic novel series Strangers in Paradise. Through his work I learned that there are different ways to tell a story and to stay true to yourself no matter what.


Q:  Do you have any favorite Latino authors?  Will we ever see any Latino characters in your books?

A:  Esmeralda Santiago, Marisa de los Santos, Alisa Valdes-Rodriguez and Isabel Allende are some of my favorite Latina authors. And there are a few Latina characters in my book The Jackets. I also have an idea for a Middle Grade/Young Adult book that will feature a Puerto Rican girl as the main character, but that’s still in the early stages. I was playing with the idea of making Bianca a Hispanic character, but the more I wrote the more I realized that she was just a typical American girl. So I kept her that way.


Q:  We read that you had an idea for a steampunk novel.  What is steampunk? And what else are you working on now?

A:  That’s another idea that I’m still playing with that hasn’t come to fruition just yet because I’m spending every free moment working on Shattered Frost. I was inspired by some amazing artwork that I saw on deviantart.com and thought that maybe I would write something in that genre. Steampunk is a sub-genre of science fiction that typically features steam-powered machinery, especially in a setting inspired by industrialized Western civilization during the 19th century. Steampunk also refers to any of the artistic styles, clothing fashions, or subcultures that have developed from the aesthetics of steampunk fiction, Victorian-era fiction, art nouveau design, and films from the mid-20th century. So you can’t just slap on some brass goggles on a character and call it steampunk. It’s much more complex than that.

I’m also working on a zombie book and a science fiction novel that takes place inside a computer. So I’m always writing.

For generations, the Frost family has run the Museum of Magical and Rare Artifacts, handing down guardianship from mother to daughter, always keeping their secrets to “family only.”﻿ Gathered within museum’s walls is a collection dedicated to the Grimm fairy tales and to the rare items the family has acquired: Cinderella’s glass slipper, Snow White’s poisoned apple, the evil queen’s magic mirror, Sleeping Beauty’s enchanted spinning wheel…​ Seventeen-year-old Bianca Frost wants none of it, dreaming instead of a career in art or photography or…well, anything except working in the family’s museum. She knows the items in the glass display cases are fakes because, of course, magic doesn't really exist.​ She’s about to find out how wrong she is.


To read an excerpt of FIRST FROST, click here.

GLASS FROST – Book 2 in The Frost Series
﻿When Cinderella’s glass slipper is stolen, Queen Felicia sends her faithful steward Terra﻿nce to the real world to retrieve his love and witch-in-training, Bianca Frost. The power of the glass slipper, when paired with its mate, and in the wrong hands, could ruin the peace of Everafter. Bianca must gather every bit of magic she has learned in the past few weeks to find the slipper and protect her new love. Together, Bianca, Ming, Prince Ferdinand, and Terrance venture deep into the heart of Everafter to seek clues as to who has stolen the slipper and why. Along the way, they uncover what happened to the Seven Dwarves after Snow White married the prince, but also learn the awful risk of tampering with black magic and the high price that must be paid for magic, even when used for good.  Bianca and Terrance’s relationship is put to the test. Through the pain of suffering and loss, Bianca must determine if following her gallant boyfriend into his faraway world is in fact her heart's desire.###

Kimber Leigh said…
I'm so excited to hear about Shattered Frost since I really enjoyed the first two Frost books.

I know what you mean about grabbing time where you can find it. I've crafted entire scenes in my head while driving from point A to point B. For me writing isn't something I can turn on and off, but rather it's always with me, whispering in my mind. Sometimes the family is just louder :)

Yes, I'm definitely working on the third book. It might take me a little longer to write since there's so much going on and I want to make sure it's just right. I don't wanna rush through an entire novel and have it come out all wrong, you know what I mean? I'd rather take my time and write a great book that will make the series better. Makes sense, right? LOL

And I'm always writing, you're right. It's not something that you can turn on and off. I know my characters are doing stuff and living their 'lives' even though I'm not actively writing their stories. I like to think of it as being the good kind of schizophrenic. ;)
3:23 PM

Liz DeJesus said…
Oh before I forget! There's a contest going on my facebook page. Check it out, there's a chance for you to win signed copies of First Frost and Glass Frost. Good luck! https://www.facebook.com/FirstFrost1/app_228910107186452
3:41 PM

Unknown said…
This is an informative and interesting post for I think it is very useful and knowledgeable. Thanks for sharing. . .
best packing and unpacking services mysore.
1:21 AM