REVIEW: MAN UP: CRACKING THE CODE OF MODERN MANHOOD by Carlos Andrés Gómez 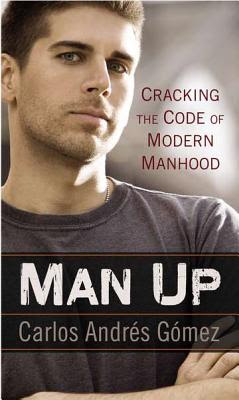 MAN UP is a powerful book that challenges the traditional image of the Latino “macho man.”  Heck, it challenges the traditional images of “every man”, especially the American male.
It’s raw, honest and hopeful.  Gómez opens up to readers and exposes his greatest fears and vulnerabilities.  Nothing is off-limits.  He talks about his family, heritage, sexuality, and relationships.  This book is about growth and transformation, about courage and strength, about redefining the concept of masculinity.
Gómez is the son of a white mother and a Colombian father.  He is fair with green eyes, but with his last name and his heritage, people assumed his father was a drug dealer.  His father was a United Nations diplomat and the family lived all over the world.  By the time, he graduated from High School, Gómez had moved 12 times and had lived in four countries.  Hence, his definition of being a man was different.  He saw grown men holding hands in Africa.  In Europe, men hugged and kissed upon greeting each other.  It didn’t mean anything, they were friends.  There was nothing wrong with those images until Gómez moved to the U.S. and learned differently.
Gómez didn’t really understand the racial prejudices and phobias common to Latino and Black children, as he did not come to live in the U.S. until he was seven.  Then, he had to learn English and assimilate into his new world.  It was not easy.  He felt very much the outsider.
Gómez grew up to be a teacher and a social worker, but left those professions to become a poet, performer and writer.  He learned three value lessons in life that carry him to this day: the importance of being a good listener; of being uniquely yourself; and of empathizing with other people.  Those were hard won lessons.  Valuable lessons.  Lessons that he wants to teach others through this book, and through his performances as a poet and a speaker.
MAN UP actually started as a script.  It was later that Gómez expanded it into the book it is today.  This book offers young men another possible “male figure” – one who is a peacemaker, one who understands emotions, one who communicates with others, one who is not afraid to be himself.  This book is not just for men.  It’s also for women so they know how their men should act, and so they know how to raise their sons.
The overall lesson here:  Men don’t have to be “machos” or rough and tough to be real men.###

ABOUT THE AUTHOR:   Carlos Andrés Gómez is an award-winning poet, actor, and writer. A former social worker in Harlem and the south Bronx and a public school teacher in Philadelphia and Manhattan, he has been nominated for the Pushcart Prize and was named Artist of the Year at the 2009 Promoting Outstanding Writers Awards. He costarred in the Spike Lee film, Inside Man, and appeared in the sixth season of HBO's Russell Simmons Presents Def Poetry. He lives in New York City. Man Up is his first book. To learn more about him, visit him at www.carloslive.com.

Unknown said…
It seems like you have a lot of knowledge about this. I appreciate you and thanks for sharing with us. . .Car moving in indore.
1:28 AM