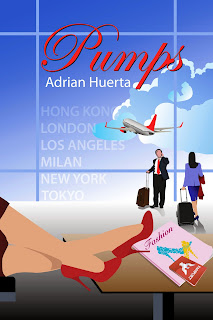 Something different was tugging at her soul.  It was as though the raging fire that had been controlling her life, directing all of her decisions to viciously zoom through life, stomping on guys and living selfishly on her rise to the top was finally dulling to a mere flame.  She knew that it was still there, though.  She could feel it.  There was peace though, in her heart, a peace so subtle but strong. The peace calmed her and told her that things would be ok. --- Alexis Cruz
Bridget Jones meets high fashion in Adrian Huerta's PUMPS.
Alexis Cruz is a sassy, hot, take-no-prisoners, high maintenance drama queen readers will love!  She is brutally honest, outrageously outspoken with lots of sex appeal,  tremendous fashion sense, and who thinks nothing of crushing the hearts of men with her Jimmy Choos.
Whether we are cheering her on or ready to give her a set down, Alexis is a heroine -- or anti heroine! -- to watch.  This reviewer enjoyed her antics, her kick-ass attitude, her win-at-all-costs mantra and her courage in facing the unknown and winning.
Dare I call this chick lit?  I will!  This is chick lit at its best.  I am surprised and delighted that it was written by a man.  PUMPS has a quick pace, continuous action and chuck-full of colorful characters from our heroine on down.  I can't wait for PUMPS 2 coming out in the New Year and to reconnect with Alexis and cast!
BOOK SUMMARY:   Growing up poor and the daughter of a hotel maid, Alexis Cruz has made it her mission to be a famous career woman with a glamorous life her mother could be proud of.  Well, this Latina has arrived!  As production manager for Cuoio-L.A. shoes, Alexis basks in her jet-setting life of endless parties, lavish fashion shows, hanging out with all the A-List people, and where the men are plentiful -- a British boyfriend in LA, a boytoy in Barcelona and numerous sexy guys she picks up at the hottest clubs around the city.
But with the Big 3-0 on the horizon and a near-death experience, Alexis suddenly finds herself full of anxiety, doubts, regrets and the new owner of a black and hot-pink motorbike.  And, is that her biological clock ticking?!  Then, as if a mini mid-life crisis weren't enough, her boyfriend wants to marry her, the boytoy wants to move in, her long lost father wants to reconnect, her mother continues to warn her against trusting men, and her boss is moving their factory from Italy to China!  What's a girl to do?  Alexis pulls up big girl panties and carries on!
Soon the cynical career woman driven only by ambition and the ideal of success, finds herself reevaluating her life, her job, her future. Alexis accepts the fact that she won't ever have the fairy tale love she dreamt of or thought she'd share with her high school sweetheart, but she has all the rest -- looks, power, money, rich British fiancé.  Surely love will grow with time.  But on the eve of her wedding day, who does fate throw in her path but the only man she ever truly loved and trusted -- her ex, Manolo.
PUMPS 2 will be out in 2014, and we'll be able to find out then if there was a wedding!  Isn't that just like a man to leave us hanging?  I love it!  Stay tune. ###
ABOUT THE AUTHOR:   Adrian Huerta and his family live with their dogs in San Diego, California. A graduate of San Diego State University, he has always been a writer at heart, and after working many jobs, he has rolled up his sleeves and got to work on being a novelist. Adrian has dealt with many of the hardships of life, including being raised by a single parent, and living in near-poverty. He has persevered through it all, never losing hope, and always striving for a better life. He believes in working hard and following your heart, and that the greatest success in life is love, not money.  Readers can connect with him at http://adrianhuerta.blogspot.com/ and http://a-lo-books.blogspot.com.

Unknown said…
It is nice post and I found some interesting information on this blog, keep it up. Thanks for sharing. . .
Car transportation in bangalore.
1:54 AM