REVIEW: HUNTING SEASON: IMMIGRATION AND MURDER IN AN ALL-AMERICAN TOWN by Mirta Ojito 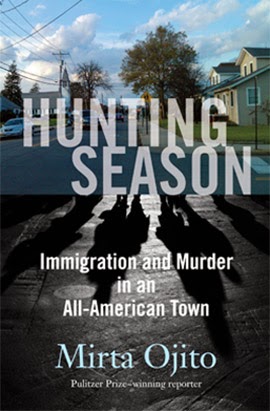 "In the United States immigration is at the heart of the nation's narrative and sense of identity.  Yet we continue to the conflicted by it: armed vigilantes patrol the Rio Grande while undocumented workers find jobs every day watching over our children or delivering food to our door."--Mirta Ojito
"Hate is always looking for another place."  --Joselo Lucero, brother of the murder victim
Journalist and Columbia University Professor Mirta Ojito has written a powerful and compassionate account of the 2008 murder of Marcelo Lucero, an undocumented Ecuadorian immigrant, at the hands of seven teenagers in the All-American town of Patchogue, Long Island, about 60 miles outside New York City.
HUNTING SEASON holds up a mirror to the face of America and what we see is not pretty.   We, a nation of immigrants, are still intolerant of "other" immigrants.  We're racist, prejudiced, hateful, uncaring. (No, not all of us, but a vast majority.) And, the frightening thing is that our children have learned from this example.
Immigrants come to the U.S. from all corners of the world -- Africa, Europe, Asia, India, et al --, but  immigrant has become synonymous with Mexican, with Hispanic.  And it was Hispanics that the "Patchogue 7" were hunting that night.
Teenagers out "hunting beaners," basically anybody who was or looked Hispanic.  These were not boys just being boys or some bad apples.  These were All-American teens and the hunting had been going on for months.
Most of the Hispanics "hunted" tried to run, but once on the ground they curled into themselves and accepted the blows.  None reported the attacks as they felt the police would not be sympathetic to their plight.  But one man stood his ground and fought back, and instead of just being beaten, Marcelo Lucero was also stabbed.
And with Marcelo's death, an idyllic charming little village became "ground zero" for the nation's immigration debate.  Suddenly, the eyes of the nation, and in fact, the whole world, turned to Patchogue.
A immigrant herself, Ojito is one of the lucky ones who never suffered such hatred.  She took three years to write this book; travelling from Long Island to Ecuador to get a well rounded picture of all the parties touched by the senseless murder:
The Mayor, son of immigrants himself, who couldn't believe that the harassment of Hispanics could turn to murder, not in "his" town.
The Librarian who reached out to the Spanish speaking community to help them learn English and adjust to their new homes.  Her call for help in the harassment of her students was not heeded until too late.
The Council Executive who dismissed the case as a "one-day story" and had to apologize to the community at large.
The Pastor who didn't know how to reach out across the great divide in his congregation until after the tragedy.  Then his generosity and compassion helped to start the healing.
The single mother, a world away, who sent her sons to America for the survival of whole her family.
The baby brother who followed his brother into what he thought was exile, and what turned into anything but the promise land.
The victim, a lonely immigrant, who had enough of feeling like an outsider, who had sent back enough money to buy his family a house and necessities, and who was planning his return home when the unthinkable stopped him.
The teenagers, "good kids" with good grades, well liked, but who when bored and restless went out "hunting."
Ojito gives us a good picture of the Patchogue community before and after the murder garnered from personal interviews she conducted with friends, neighbors and community leaders in Long Island and Ecuador; plus, police reports, court records and media accounts.  However, it must be noted that none of the teenagers or their parents -- except for two -- agreed to speak to her.
Pity that for I would have especially liked to have learned more about Jose Pacheco, one of the Patchogue 7 and the only Hispanic in the group.  He had been hunting his own kind for months.  Why did he permit his friends to do so? why did he join them? why didn't he see himself in the Hispanics he hunted?
Jeff Conroy, the teen who did the actual stabbing, wrote to Ojito from prison and just asked that she be "balanced and respectful."  Readers will find that she has been both.###
ABOUT THE AUTHOR:  Mirta Ojito, a reporter since 1987, has worked for The Miami Herald and El Nuevo Herald, and, from 1996 to 2002, for The New York Times, where she covered immigration, among other beats, for the Metro Desk. She has received numerous awards, including the American Society of Newspaper Editor’s writing award for best foreign reporting in 1999 for a series of articles about life in Cuba, and a shared Pulitzer for national reporting in 2001 for a New York Times series of articles about race in America.

She is the author of Finding Mañana: A Memoir of a Cuban Exodus, and of HUNTING SEASON: IMMIGRATION AND MURDER IN AN ALL-AMERICAN TOWN.   Her work has been included in several anthologies including To Mend the World: Women Reflect on 9/11, Written into History: Pulitzer Prize Reporting of the Twentieth Century from The New York Times, and How Race is Lived in America.

Ojito is a member of the Council on Foreign Relations and of the Board of Trustees of the Phi Theta Kappa Foundation.  She contributes to several publications, in English and Spanish, and writes a twice-a-month column for The Miami Herald. She lives in Manhattan with her three children.  Visit her at www.mirtaojito.com.

Unknown said…
Wow! This is an awesome post and so is helpful to me, thanks for posting. . .
best packers and movers in allahabad.
1:13 AM