"The kids who play Ripper are a select group of freaks and geeks from around the world who meet online to hunt down and destroy the mysterious Jack the Ripper." 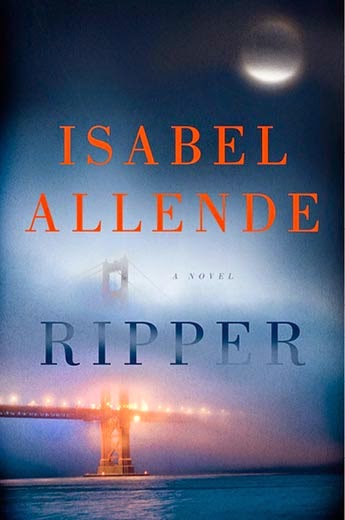 RIPPER is not the type of novel fans expect from Isabel Allende.  This is a totally new genre for her, and instead of keeping to the "norms" of a typical suspense novel, Allende creates her own.  And, while this may be a novel about young-adults, the graphic and sexual nature of the killings call for a more mature audience.
RIPPER is about revenge, obsession, betrayal and loyalty.  The premise is very interesting -- gamers in search of a real killer--, but Allende over populates this novel to the point where the reader loses sight of the story.  Instead of the focus being the murders and the gamers, the focus becomes the never ending list of who's who of secondary characters -- the psychic, the neighbors, the lovers, the exes, the policemen, the clients.  Readers will be so busy trying to keep all the characters in order that the suspense is diluted.  However, true fans will continue reading to the end when, finally, all the loose ends will be tied, and a true hero will emerge to save the day.
True fans will also be interested in learning that Allende wrote this book in Spanish and it was translated into English.  Plus, this book was supposed to be written jointly with her husband mystery writer William C. Gordon, but in the interest of preserving their marriage, Allende wrote it alone.
SUMMARY:   The kids who play Ripper are on the search for a killer.  Their games master, 17-year old Amanda Martín, moves the game from London 1888 to San Francisco 2011.  Now, the kids are on the hunt for another serial killer, a live one.  They are one step ahead of the police, and each brutal death brings the Ripper gamers closer to identifying the killer.  But little do they realize that the killer is known to them and his next victim may be Amanda's mother, Indiana.
ABOUT THE AUTHOR:  Isabel Allende is the bestselling author of 12 works of fiction, four memoirs and three young-adult novels, which have been translated into more than 35 languages.  She is the author most recently of the bestsellers MAYA'S NOTEBOOK, ISLAND BENEATH THE SEA and DAUGHTER OF FORTUNE.  In 2004, Allende was inducted into the American Academy of Arts and Letters.  She received the Hans Christina Andersen Literary Award in 2012.  Born in Peru and raised in Chile, Allende lives in California.  Visit the author at www.isabelallende.com.

Unknown said…
This is an informative and interesting post for I think it is very useful and knowledgeable. Thanks for sharing. . .
registered packers and movers.
1:36 AM