The trick to surviving this country, mi amor, is to look at your own face in the mirror every morning and resist the temptation to hate yourself for turning into the person you swore you’d never become. – Valentina Goldman 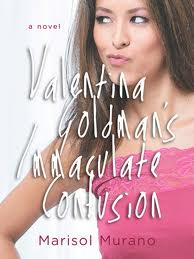 As I read this book, I pictured Valentina as Sofia Vergara’s comic character in “Modern Family”  -- the same effervescent energy, the same passionate nature--, but, whereas Sofia’s character is proud to be Latina, Valentina is sort-of not.
The book is in turns funny and sad, wonderful and silly, just like our protagonist.  Readers will alternatively admire and then shake-their-heads at Valentina’s antics, as she sits down to share her life’s story with her step-daughter.   Written in the first person, this book is like a long, chatty brunch conversation with your wild aunt, or in this case your eccentric step-mother.
SUMMARY:    Valentina Viloria believes in knowing where all the exit signs are, whether on a plane, in a crowded department store, or in life.  In fact, her motto is “cut your losses.”  And she does, especially after the end of every marriage.  (She’s been married twice.)  But now, she’s a widow with twins, which is a totally new experience, so while the urn is cooling in the fridge, (Arizona gets very hot.), Valentina shares her life story with her new teenage step-daughter.
Born in Venezuela, Valentina left the tropical paradise at 19, married and with great hopes of finding the American Dream.  One cheating husband later, Valentina is homeless, jobless and determined not to return home so she decides to move on and reinvent herself.  She takes on lots different jobs looking for the perfect fit.
Valentina does not want to be thought of as a lowly immigrant worker; hence, she stops speaking Spanish and changes her name to Val.  One may think that Valentina is being untrue to her Latinidad, but she would be the first to tell you that she is being the perfect American by assimilating to the customs of her new homeland.  Besides, Valentina is very close to her family and visits Caracas often.  Plus, there are the weekly dramatic phone calls from her sister Azucena, a top-editor in Caracas with two children, a lazy husband and an endless parade of maids to keep her abreast of the town gossip.
Many jobs and two husbands later, Valentina meets and marries Max Goldman.  For a while they have a bi-coastal marriage, until Valentina gives in and leaves New York for Arizona.  Suddenly, she is a mother of twins, with step-children and an ex-wife who criticizes her continually but refuses to speak to her. But, having a step-daughter is not so bad after all.  And the two sit down for a long chat to swap life stories.
ABOUT THE AUTHOR:  When she was 18-years-old Marisol Murano moved to the United States to attend school so that afterwards she could return to her native Venezuela to get married and have kids. None of this happened. Instead, she ended up getting a Master’s degree which eventually landed her a boring job in an exciting city: New York.

After a few years running the corporate rat race, Marisol woke up to this one day, "Even if you win the race, you're still a rat." That was the end of her banking career and the birth of her first novel: The Lady, The Chef, and The Courtesan.

A second career detour led her to become a chef and the author of a cookbook, DELICIOUSLY DOABLE SMALL PLATES FROM AROUND THE WORLD.  Between novels, Chef Marisol now travels the world conducting culinary demonstrations on exotic cuisine. In fact, VALENTINA GOLDMAN’S IMMACULATE CONFUSION was born at sea in a split-second of confusion when during a culinary demonstration a woman raised her hand to ask: “Did you always know you wanted to be a chef?”

Unknown said…
Great blog and amazing post, this information really helped me, thanks for posting. . .
packing and unpacking services gurgaon.
1:44 AM