The Latina Book Club is proud to select CHASING THE SUN as its Book of the Month.


“He should have stuck to what was working for them—ask nothing and expect no problems in return.”

“Someone who doesn’t want to be with you is not worth fighting for.” 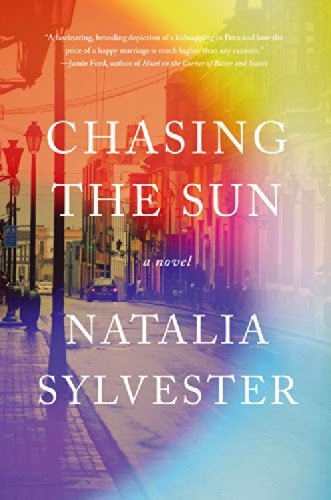 Natalia Sylvester’s debut novel is fast-paced, rousing, suspenseful and nail-bitingly realistic.  This is the story of a marriage, a kidnapping, a lover’s triangle and a reunion.  I was hooked from the first page.


SUMMARY:   A well-to-do business man, Andres and his family live in Lima, Peru, during a time of civil and political unrest, where kidnapping is a thriving business and no one with money is safe. No one.

He is focused on expanding his company and his wealth.  Another argument with his wife Marabela leads to her disappearance—again.  He wonders if she has left him—again—until he receives a ransom note.  Marabela has been kidnapped and he will pay anything to get her back.

Andres struggles to maintain an illusion of control as he scrambles to collect his wife’s ransom, tend to his two young children and hire a private mediator to help him negotiate with the terrorists. But the longer the negotiations stall, the more Andres reflects on his past mistakes and the sham of his marriage.  The only solace he finds is with an old friend  who may hold the key to his past and his wife’s future.

ABOUT THE AUTHOR:  Born in Lima, Peru, Natalia Sylvester came to the U.S. at age four and grew up in South Florida, where she received a B.A. in Creative Writing from the University of Miami. A former magazine editor, she now works as a freelance writer in Austin, Texas. CHASING THE SUN, partially inspired by family events, is her first novel.  To learn more about Natalia, visit her at www.nataliasylvester.com.

Unknown said…
Thanks so much, Eleanor! And a big thanks to Maria for featuring the book...so honored! —Natalia
10:56 AM