The Latina Book Club welcomes author Alina Garcia-LaPuerta.  We had the pleasure of meeting Alina at the recent Latino Writers Conference in New York, where she spoke about her quest to learn all there was to know about Cuba's  Scheherazade and first international diva.  We guarantee you'll be just as captivated as we were with the author and her subject.  Leave a comment below and tweet our hashtag -- #amreadingwiththelatinabookclub -- to be entered to win an e-copy of LA BELLE CREOLE this week.  Good luck! --mcf

Q:  How did you decide to write an historical biography? What particularly drew you to your subject, Maria de las Mercedes Santa Cruz y Montalvo?


A:  I first became intrigued with references to a Cuban woman in 19th century Paris. I immediately wondered how she came to be there. It seemed so unusual, and left me curious to know more.  Then the more I learned about her life, the more I became fascinated and thought that she deserved to have her story told. She had once been so famous, but somehow she had been semi-forgotten. I loved the idea of a biography since I thought her achievements were even more impressive when placed in its historical context. I also think that biography is a great way to learn about other worlds through a life. Although I will admit – her passionate and tumultuous life would have made a great historical novel!

Q:  You say that Mercedes epitomized an “unusually modern and sophisticated life,” and that she “straddled cultures.” What makes her particularly modern? Was it unusual for a woman of her time to “straddle cultures” as she did?


A:  Mercedes did things that were unusual for a woman of her time, as well as unusual for almost anyone else. She achieved her celebrity in a foreign country, working in a foreign language – noteworthy even today, but absolutely stunning in her day.  Also, Cuban women (and Latin American women in general) did not generally participate in public life or publish books.  She was considerably ahead of her time. In fact, in many ways, her life is incredibly relevant for today’s woman – for anyone who leaves their home, recreates their life, and are not afraid of challenges.

Q:  What do you think enabled her to survive and succeed in such a tumultuous time and varied places – particularly Napoleonic Spain and later in France?


A:  Mercedes’ first 13 years in Cuba with her great-grandmother, in the middle of a large, extended family gave her a very strong sense of self. No matter what happened to her family’s fortunes, she always knew where she came from and who she was. I really believe this is what enabled her to start over and recreate her life, use her talents to succeed once she found herself in France.

Q:  Mercedes is now recognized as the earliest Cuban female writer – why was she not publically acclaimed earlier?


A:  There had long been a question of identity with Mercedes. She lived in France and wrote in French (although her best known work, Viaje a la Habana/La Havane was issued simultaneously in French and in a shorter Spanish version). She wrote about Cuba in her memoirs and travel writings, but it seemed that she was viewed almost as foreigner in her homeland. Recently, the idea has been raised by scholar that her gender was a major reason for keeping her from the list of Cuban literary figures. In her day, it was a male dominated world.

Q:  After all your research, did you ultimately like Mercedes as a person and a personality?


A:  Yes! I was captivated from the beginning and the more I discovered about her and her world, the more I liked her. She wasn’t perfect – after all, who is? But I think her positive qualities far outweighed her flaws. I would have loved to have met her – and I still have so many questions that remain unanswered! 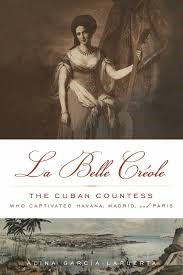 BOOK SUMMARY:  A daughter of the créole aristocracy, Mercedes led a tumultuous life, leaving her native Havana as a teenager to join her mother in the heart of Madrid’s elite society. As Napoleon swept Spain into the Peninsular War, Mercedes’ family remained at the center of the storm and her marriage to French general Christophe-Antoine Merlin tied her fortunes to France. Arriving in Paris in the aftermath of the French defeat, she recreated her life, ultimately hosting the city’s premier musical salon. Acknowledged as one of the greatest amateur sopranos of her day she nurtured artistic careers and daringly paved the way for well-born singers to publicly perform in lavish philanthropic concerts. Beyond her musical renown, Mercedes achieved fame as a writer. Her memoirs and travel writings introduced European audiences to nineteenth-century Cuban society and contributed to the debate over slavery. Scholars still quote her descriptions of Havana life, and recognize her as Cuba’s earliest female author.

ABOUT THE AUTHOR:   Alina Garcia-Lapuerta shares a strong bond with her subject, Mercedes Santa Cruz y Montalvo, in that both were born in Cuba and both experience living across different cultures.  Alina got her first glimpse of the Cuban Scheherazade -- la Belle Créole -- in an out-of-print illustrated book on Havana.  Soon she found other colonial books that quoted from Mercedes' own book, Viaje a la Habana, and what started as a simple inquiry transformed into a full-blown pursuit around the globe resulting in Alina's full-length biography of the Condesa de Merlin, la Belle Créole.  To learn more about this author and her book, visit www.alinagarcialapuerta.com.

sramosobriant said…
Mercedes sounds incredible! I love historical accounts of undiscovered Latina women who made a difference in the world. Crossing cultures is also a theme in my life and work. The booksellers in Havana are amazing. I imagine all these hidden collections from old estates finally being released into the world. There were books there that I'd never encountered. Good Luck with your book Alina.
11:50 AM