There's a new Latina on TV and she is a hit! 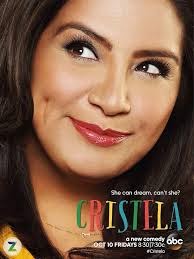 Cristela Alonzo made history this past Friday, October 10, 2014, by being the first Latina to create, produce, write and star in her own primetime comedy show.  "Cristela" (the show) debut to 6.6 million viewers and rave reviews from audiences of all backgrounds.  It's a funny, loving show about family, fulfilling your dreams, getting ahead and being a strong modern woman.  We are very excited about this new show and its portrayal of a modern Mexican family living in the heart of Texas.
But Cristela isn't the first Latina on television, and certainly not the last.  Below is a fun list of 14 other Latinos on television.  How many do you know?  We welcome additions to this list.  --mcf
LATINOS ON TELEVISION