REVIEW: THEY ONLY EAT THEIR HUSBANDS by Cara Lopez Lee 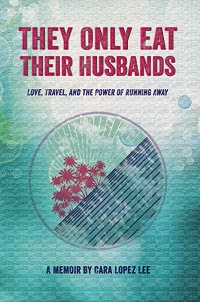 "The purpose of my life is not to get what I want.
The purpose of my life is to become who I am."
—Cara
THEY ONLY EAT THEIR HUSBANDS:
Love, Travel, and the Power of Running Away
A Memoir by Cara Lopez Lee
Conundrum Press
The first thing to intrigue me about this book was the title.  And it's fun that I can even get the t-shirt.  The second thing was the similarity of Cara Lopez Lee's THEY ONLY EAT THEIR HUSBANDS to Elizabeth Gilbert's EAT, PRAY, LOVE.  But though the two women are on journeys of self-discovery, their paths are as different as night and day.  One was searching for validation; the other was plotting her next escape.
Cara Lopez Lee's memoir is brutal, honest, adventurous, and outrageous.  Readers will be both intrigued and repelled by her situations and revelations, and yet they won't be able to stop themselves from cheering for this courageous, if misguided, woman in her desperate search for true love and real independence.
SUMMARY:  Cara strives to be honest and fair in the telling of her story, and it helps that she kept a journal with details of the good, the bad and the ugly from the nine years she spent in Alaska ("The Final Frontier") in a lover's triangle with two alcoholics.  Finally, enough is enough, and Cara is ready to runaway again -- a pattern she has repeated all her life.  So she runs away from Alaska and plans to go around the world and get in touch with her inner self.  Only neither journey turns out to be easy or as idyllic as she hoped.###
Read an excerpt of her book by clicking here. 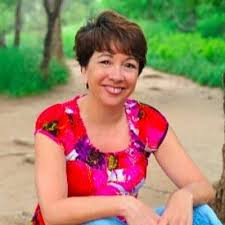 ABOUT THE AUTHOR:  Cara Lopez Lee's stories have appeared in the Los Angeles Times, Denver Post, Santa Fe New Mexican, Connotation Press, and Rivet Journal. She's a book editor, and she's on the faculty at Lighthouse Writers Workshop. Her writing has earned multiple awards from The Denver Woman's Press Club and Alaska Press Club. She was a television journalist and a writer for HGTV and Food Network. She has traveled throughout Asia, Europe, Africa, Latin America, and the United States. Cara married her husband at an active volcano in Costa Rica. They live in Denver.  Visit her at http://www.caralopezlee.com/.