Join the Latina Book Club this week as we feature books with strong, courageous mothers.
And remember our Book of the Month, THE CRUEL COUNTRY, another tale of the power of a mother's love.
Happy Reading.  Happy Mother's Week. 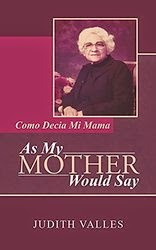 "Learn from your parents if they are still alive.  They know you best and will give you the best advice based on the mistakes they’ve made in their own lives. Listen to them with respect; they know what they’re talking about.” -- Judith Valles
As we celebrate Mothers this week, we came across this powerful tribute to a mother.  AS MY MOTHER WOULD SAY: COMO DECIA MI MAMA is a short, funny, wise 37-page book full of "dichos" -- sayings, phrases that former San Bernadino Mayor Judith Valles collected from her mother and used in her personal and professional life, and which she gladly shares with other family members, friends, colleagues, and now with us readers.
BOOK SUMMARY:   AS MY MOTHER WOULD SAY is about being raised in a conservative Mexican Family that valued the traditions and sayings of Mexico. The proverbs or "dichos" were a daily dose of teachings from Valles mother.  The family believed their mother made them up as situations arose and it was not until they began using the dichos as adults, that other people they met from Mexico could relate, laugh and say "my grandma used to say that."  These dichos are not so common anymore among young Mexican families, and at the request of many of her colleagues, co workers and students over the years to write about these sayings, Valles decided to do so. While some of these dichos may not be sophisticated, profound, and intellectual, they are amazingly cogent. They have been invaluable to Valles in developing my style in management and leadership.#
ABOUT THE AUTHOR:  Judith Valles, 81, has three children, seven grandchildren and one great-grandchild.  She became the first Latina president of a university or college in the state of California in 1988 when she presided over Valley College.  She was also Mayor of San Bernardino from 1998-2006 and the first female Hispanic mayor of any city in the United States with a population of more than 100,000.  She has retired several times but has not been successful at it. She has been consulting and often called upon to be a speaker at different conferences She lives in San Bernardino, California, her hometown.