I was in Chicago recently and I made time to visit the National Museum of Mexican Art to see THE HOUSE ON MANGO STREET exhibit.  The exhibit included some photos of Sandra Cisneros and there was even a cordon-off area with her old desk and typewriter, and an old street sign.  (There actually is a Mango Street.)  There were also a few photos that spoke of her life and experience.
But the real focus of the exhibit was the work of other artists interpreting Cisneros' book.  Picture taking was not allowed inside the exhibit so I can only tell you about the amazing, creative, colorful and vibrant interpretations from other artists -- some were paintings, there was a mural and a 3D structure one couldn't miss.  All very inspiring.
I was able to take this one picture as I was going into the exhibit -- a quote of limitless energy:  "I can never have too much sky." 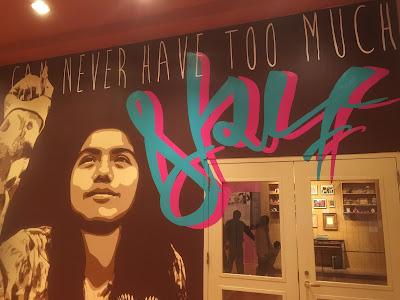 Here are some other photos of some street murals leading up to the museum.  Unfortunately, it was raining but that only adds to the beauty of them. 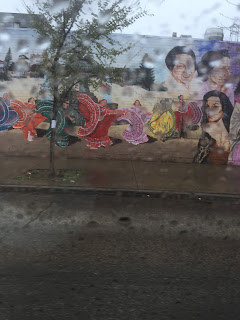 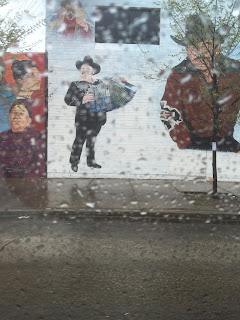 The National Museum of Mexican Art also featured three other exhibits:  Carmen Parra: Suave Patria; Dos Experiencias, Una Identidad: Rene Arceo Prints; and Nuevas Historias.   There were  more prints and paintings; neon lights that spelled "Make Tacos Not War; skulls, dishes, furniture.  All beautiful in their own way.
So the next time you are in Chicago, add The National Museum of Mexican Art to your list of places to visit -- you won't be disappointed.
To visit the museum and learn more about their exhibits: http://nationalmuseumofmexicanart.org/
BOOK SUMMARY:  THE HOUSE ON MANGO STREET is the remarkable story of Esperanza Cordero. Told in a series of vignettes – sometimes heartbreaking, sometimes deeply joyous – it is the story of a young Latina girl growing up in Chicago, inventing for herself who and what she will become.  This book is being taught in High Schools and Universities around the world. 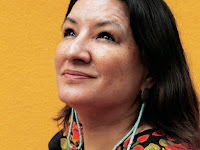 ABOUT THE AUTHOR:  Sandra Cisneros has written several award-winning books and is the founder of two organizations that serve writers: the Macondo Foundation and the Alfredo Cisneros del Moral Foundation. She was awarded the John D. & Catherine T. MacArthur Fellowship, two National Endowment for the Arts Fellowships, and the Texas Medal of the Arts. With more than six million copies sold and translated into many languages, her novel THE HOUSE ON MANGO STREET has become a true coming-of-age classic. To learn more about this legendary artist, visit her at www.sandracisneros.com.