REVIEW: DREAMERS: An Immigrant Generation's Fight for Their American Dream by Eileen Truax


If the DREAM ACT is passed in the next few months, I have a future.  If it's not, I'm going to have to fight for my future. --Elioenai Santos
I talked with some people on the senator's staff, and I realized how disconnected politics are from our lives. I understood that the change that we need has to come from the people most affected by an immigration system that is broken.  Our voices and our stories have to become our tools to combat this oppressive system. --Carlos Amador, Dreamer and co-president of United We Dream
Eileen Truax has taken one of the most important and hottest themes of this generation -- immigration reform -- and given it a face, actually faces.  Like Nancy who worked for the government in California and one day on her way to work got pulled over and deported to Mexico, where she knew no one and only had $40 to her name. Daniella with "Dream" written on her sneakers taking part in a civil disobedience sit-down in Phoenix with a wall of cops towering over her.  And, Joaquin who died as his dream of being a successful architect died.
DREAMERS (Beacon Press) is an emotional, passionate and informative book.  It's not about statistics or policies; this book is about 10 young adults and how they are fighting for a future in the only home they've ever known -- America.
Eileen asks everyone who reads her book to keep an open mind.  Yes, six out of ten of the Dreamers are Mexican, but they are certainly not the rapists and gangsters that scare Donald Trump.  These are promising young "Americans," who for lack of government recognition and a social security number find it difficult to go to university and get a decent job.
But these Dreamers are no longer standing still.  They are educated, organized and determined to be heard and to affect change.  They are “Undocumented, Unapologetic, and Unafraid."  And, thanks to social media, their experiences, frustrations, and successes are well publicized and documented. Also, thanks to social media, the Dreamers are uniting nationwide and as they become stronger, the government is going to have to respond.  Let's just hope that it's sooner rather than later.
SUMMARY:  DREAMERS is a movement book for the generation brought to the United States as children—and now fighting to live here legally.  Of the approximately twelve million undocumented immigrants living in the United States, as many as two million came as children. They grow up here, going to elementary, middle, and high school, and then the country they call home won’t—in most states—offer financial aid for college and they’re unable to be legally employed. In 2001, US senator Dick Durbin introduced the DREAM Act to Congress, an initiative that would allow these young people to become legal residents if they met certain requirements. And now, more than ten years later, in the face of congressional inertia and furious opposition from some, the DREAM Act has yet to be passed. But recently, this young generation has begun organizing, and with their rallying cry “Undocumented, Unapologetic, and Unafraid” they are the newest face of the human rights movement. In DREAMERS, Eileen Truax illuminates the stories of these men and women who are living proof of a complex and sometimes hidden political reality that calls into question what it truly means to be American.###
NOTE:  This book is also available in Spanish.
ABOUT THE AUTHOR:  Originally from Mexico, Eileen Truax is a journalist and immigrant currently living in Los Angeles.  She contributes regularly to Hoy Los Angeles and Unidos, and writes for Latin American publications including Proceso, El Universal, and Gatopardo.  Eileen often speaks at colleges and universities about the Dreamer movement and immigration.  Visit her Spanish blog by clicking here. 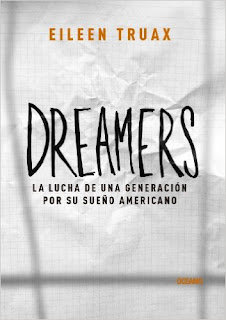 Unknown said…
Development credit is most appropriate for profiting fund with a specific end goal to development home. One of numerous focal points of development credit is that the borrower pays just enthusiasm till the development is completely finished. Foremost sum can be reimbursed when home is at long last built. Also you can even transform the advance into a home loan credit later in the event that you are not able to pay off the advance. Perused the article for diverse perspectives. car title loans
10:21 AM

JON said…
Mastercards are sometimes used to pay for these sorts of crises, yet in the event that the open balance misses the mark, an individual will need to handle the monetary squash in another way. Auto title advances have a tendency to be a keen fix for those obliging quick cash. Payday Loans San-diego
2:18 AM