The Latina Book Club starts off Hispanic Heritage Month with an excerpt that is out of this world.
We congratulate author Stephanie Diaz on her latest novel and look forward to more exciting books in her Extraction Series. 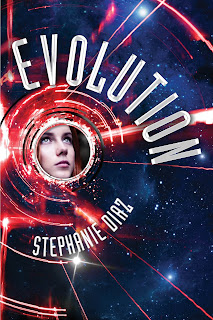 I scurry off the boarding ramp. Flames in the grass lick at my boots, and I have to swerve to the left to avoid another laser from the sky. There’s smoke everywhere. Beechy told me to find Dean, but I have no idea where he is. All the soldiers look the same in their armor.
Sam’s soldiers launch another missile and take down a raider. If they had more visibility and better protection from the raider fire—if they’d had time to dig trenches—they might actually have a chance of bringing down most of the swarm. But I don’t see how they’re going to survive for long the way things are. Soon there won’t be any part of the ground not covered in flames.
Already, some of the soldiers are giving up, trying to escape to the trees for cover. A man not far ahead of me stumbles into the path of a Mardenite laser, and he doesn’t have time to scramble out of the way. He lets out a horrible shriek and falls to his knees as the fire sears through his armor.
Bile rises in my throat. I tear my eyes away and race around him.
I’m almost to the forest, but many of the trees on the edge of it are alight with flame. I search frantically for the safest path in—there, on my right-hand side. There’s a massive piece of ship junk in my way, a chunk of the hovercraft hull that tore off during the crash. I duck my head from another laser and scurry around the debris.
That’s when I see Dean running toward me through the smoke. He has an arm over his head to block his helmet from the rain, and his other hand clutches his pulse rifle. He yells at me, “Clementine, get to the trees!”
“I’m trying!”
He reaches me and grabs my sleeve, wrenching me out of the way of another laser. The two of us keep running toward the clear spot between the trees.
Twenty more feet. Fifteen.
Ten.
Out of the corner of my eye, I see a flash of light. The lights on the wings of a raider soaring overhead. I look up just in time to see an object drop from a hatch in the warship’s underside—something that looks like a grenade. Aiming right for the trees ahead of us.
Every part of me seizes in terror. I try to scramble away from the grenade, but there are too many pieces of debris in my way, and I can’t get anywhere quickly enough.
Dean pushes me to his right, so hard I fall to the ground. I feel his weight press on top of me as he crouches over me, shielding me from the explosion.
There’s a thump as the grenade hits the ground. I brace myself for a BOOM!
But the explosion doesn’t come.
There’s a hissing sound. I lift my head and see the object that fell a few feet away from us. It’s a round object made of some sort of metal, almost like a cam-bot but bigger. Whitish vapor streams from openings in the metal ball, seeping in every direction.
The gas engulfs my body and I feel a burning sensation all over, like someone’s stabbing me in a thousand points with needles.
The vapor is poison.

BOOK SUMMARY:  Clementine's world is on the brink of destruction. An army of aliens from the distant planet Marden has arrived with a massive fleet of battleships, intent on finally putting an end to the war Kiel's old rulers initiated. With the Alliance headquarters reduced to rubble and one of the rebel leaders close to death, Clementine and her friends have no choice but to retreat to the Core to escape the alien ships attacking the Surface. But safety in the Core means forming a temporary alliance with their sworn enemy, Commander Charlie. He's a ruthless man and a liar, but striking a bargain with him—his pardon in exchange for their help defeating the Mardenites—is the only way the rebels might survive the war. And Charlie needs their help too, for Marden's force is more powerful than anyone anticipated, with weapons and technologies never before seen on Kiel. Unless old feuds can be set aside long enough for a diplomatic solution to be found, all of Kiel's people will be destroyed, and everything Clementine and her friends have sacrificed in their fight for peace will have been for nothing.

ABOUT THE AUTHOR:  Twenty-one-year-old Stephanie Diaz wrote her debut novel, Extraction, when she should've been making short films and listening to college lectures at San Diego State University. When she isn't lost in books, she can be found singing, marveling at the night sky, or fan-girling over TV shows. You can visit her online at www.stephaniediazbooks.com.