It's Halloween Week and the Latina Book Club is proud to bring you books that will scare you and make your heart race.
So Be Brave and Happy Reading.

"As a descendant of Abraham Van Helsing, I'd inherited a legacy -- more like a psychotic sense of noblesse oblige -- which meant I had a responsibility to protect people from the undead."--Micheline

If you love hunting vampires, vanquishing ghosts and killing zombies, Micheline Helsing is your girl!

This book is not for the faint of heart.  It has enough gore, blood and other gross icky substances to fill a pool.  Micheline is no Buffy either.  She's a sassy, dedicated, tattooed hunter determined to kill monsters, save her crew and uphold the family name. But being on a deadline sucks!  Readers will love this young crew of monster hunters.  We hope there is a sequel!

SUMMARY:  Micheline Helsing is a tetrachromat -- a girl who sees the auras of the undead in Technicolor. As a Helsing, she has been taught since childhood to destroy monsters.  Her weapon of choice is a special camera that exorcises ghosts by capturing their spiritual energy on film.  This teenage dynamo leads a crew of reapers -- Oliver (nerd whiz), Jude (predicts death) and Ryder (sidekick and major crush). Together they hunt down monsters and kill them.  Unfortunately, their first unauthorized solo mission goes horribly wrong.  She has let loose a nightmarish entity on the city; she and the boys are infected with a ghostly chain curse which will slowly eat away their bodies.  They have seven days to exorcise the demons within or die horrible deaths, and that's not even the bad part. The bad part is that they are all considered renegades and are being hunted by their own people, and leading the charge is the most powerful monster-hunter of all -- her father.

To read the first two chapters of SHUTTER in Wattpad, click here. 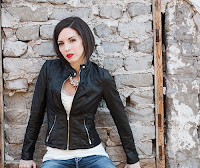 ABOUT THE AUTHOR:  Courtney Alameda is a veteran bookseller and librarian. She holds a B.A. in English Literature with an emphasis in Creative Writing from Brigham Young University.  A Northern California native, Courtney now resides in Utah with a legion of books and a five pound cat who possesses a giant personality. SHUTTER is her first book, published by Feiwel & Friends/Macmillian (February 2015).  Her next novel, PITCH DARK (Fall 2016), is a genre-blending science fiction/horror novel in the vein of Ridley Scott's 1979 film "Alien."  Visit Courtney at www.courtneyalameda.com.